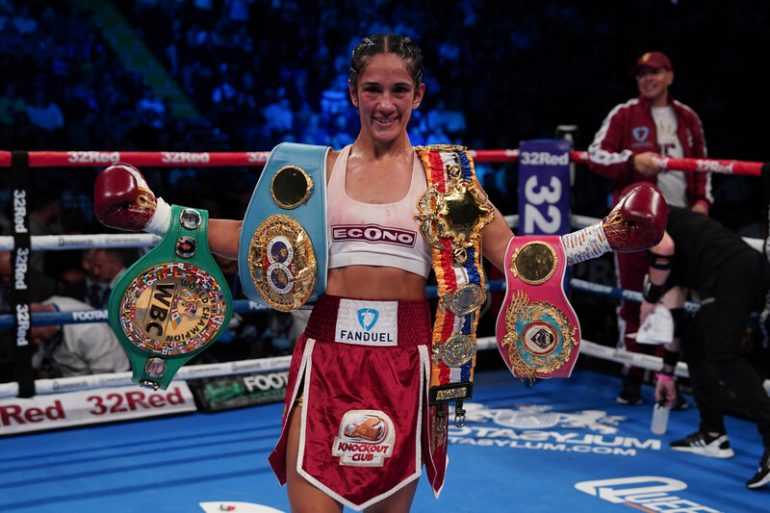 Even with the postponement of the Shields-Marshall all-women’s boxing card, the month of September is on its way to being one of the best in recent history, and the results of the fights that have taken place recently have produced some important changes in our Ratings.

In the most important one, Terri Harper crashed into the party at junior middleweight with a superb win over titlist Hannah Rankin last week.

The former junior lightweight titlist who moved up to lightweight after losing her belt to Alycia Baumgardner decided to take the dramatic step of jumping up three additional weight classes to challenge Rankin, and the result was quite spectacular. Harper looked strong and dominant in her win over a bigger opponent, and looks like she will fit in quite nicely in this suddenly talent-laden division.

“Talk about a sea change,” said historian Malissa Smith. “Terri Harper proved the naysayers very wrong with a superb performance. She left Rankin punching at the air with her quick movement, and showed that she has been an excellent student of the game with trainer Stefy Bull.”

Smith’s fellow writer Yesica Palmetta added that “I saw that Harper was more cunning exposing Rankin’s technical deficiencies in her defense, something that Harper knew how to overcome.”

Just as Harper moved up, current champ Claressa Shields also did. “T-Rex” has not fought at 154 pounds for over 18 months and has no apparent plans to return to the weight any time soon. Therefore, she was stripped from her Ring belt, just in time for the winner of the recently announced fight between current No. 1 Marie Eve Dicaire and No. 2 Natasha Jonas to be eventually crowned as the new champ.

In the featherweight division, a long-overdue reward to one of the sport’s best-ever was finally awarded when perennial pound-for-pound entrant and No. 1 Amanda Serrano dominated No. 3 Sarah Mahfoud to lift the inaugural Ring featherweight belt.

“Serrano’s performance was once again unbeatable and despite the fact that Mahfoud had been showing good skills, she was clearly surpassed by the Puerto Rican,” said Rincon Rojo magazine editor Irene Deserti, with Smith adding a few caveats by saying that “Amanda Serrano’s mastery of the game proved to be too much for Mahfoud, but Serrano’s performance, while demonstrating her boxing prowess, was not at all explosive and waned a bit giving Mahfoud opportunities to counter effectively and score points. Had Mahfoud been more confident in the earlier rounds, she might have given Serrano an even harder time.”

Serrano’s promotion meant that a vacancy was generated at the bottom of the list, and Argentina’s legendary multiple champ Marcela Acuña, fresh off a win over the always tough Laura Griffa, was picked to occupy the No. 5 position.

“Acuña looked fast, precise and intelligent, anticipating attacks and using her legs to achieve the perfect angle that would allow her to land the best shots. She dominated the entire fight,” said Deserti, with columnist Mark Jones adding that “I doubt if Marcela Acuña, who will turn 46 in a few weeks, could defeat Serrano, Mahfoud, or Cruz-Hernandez, but she could compete and deserves the No. 5 ranking at featherweight. Acuña is arguably the greatest junior featherweights of all time and a future IBHOF inductee.”

In the always competitive lower divisions, a couple of young fighters on their way up also made a splash, led by Argentina’s Celeste Alaniz and her impeccable performance over rugged contender Debora Rengifo. And Germany’s Sarah Bormann also scored a significant win that earned her a promotion in the suddenly stacked strawweight division.

“Alaniz has physical skills that make her a competitive figure among the greats of the division,” said Palmetta, who followed Alaniz’s career closely, while Jones agreed by saying that “(Alaniz is) an absolute beast and a serious threat to any fighter competing at 112 lbs,” adding that “I’d declare that Sarah Bormann would unify titles and become a possible pound-for-pound entry in any other division, but Seniesa Estrada and Yokasta Valle prevent that. She should be ranked ahead of Christina Rupprecht, who hasn’t fought since July 2021.”