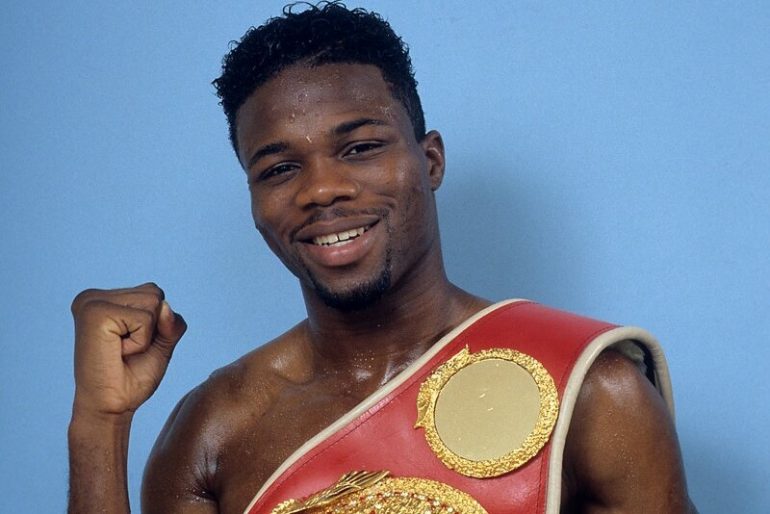 Photo by The Ring/ Getty Images
26
Sep
by Anson Wainwright

The silky-smooth boxing skills of Charles Murray helped him claim the IBF junior welterweight title in the 1990s.

Murray was born in Rochester, upstate New York, on August 18, 1968. He was raised by his grandmother and comes from a working-class background.

“Rochester was a good place to grow up,” Murray told The Ring. “I played touch football with the teens when I was eight, nine, 10 years old. [I played] basketball in the fifth grade – we were city champions.

“I attended school of the Arts in the seventh and eighth grade, then I transferred to Jefferson high. I was captain of the junior varsity team, then I moved up to varsity. I was liked and respected by my peers.”

At age 12, Murray had his first amateur fight after visiting a local gym. However, it wasn’t until he turned 15 that he got serious about the sport.

“I dropped out of school to concentrate on boxing at 17,” said the former titleholder. “Grandma said I had to work, so the coach got me a job at the recreation center. That’s when I trained mentally and physically. From then on I was a man.”

“The Natural” was a standout amateur. He won the U.S. nationals, stopping Skipper Kelp in the opening round in 1987.

“I was an elite amateur,” said Murray, who went 69-9 in the unpaid ranks. “We were in a program called ‘Operation Gold.’ You had to be in the top two in the nation in your weight class and I was No. 1. We received a monthly income of $500 to just stay ready.”

Murray won the Eastern Trials ahead of the 1988 Olympics. However, he lost to eventual representative Todd Foster in the box offs and decided his future lay as a professional. Consequently, Murray uprooted from Rochester to Las Vegas and trained under Kenny Adams. He was managed by Marc Roberts, who formed a team of three boxers – Ray Mercer, Al Cole and Murray – named “Triple Threat.”

In his first year as a pro, Murray won 10 straight bouts. However, Roberts wanted the fighters to live near him and Murray moved back east to New Jersey.

“I think the sparring I received had a great deal to do [with my improvement,]” he explained. “We sparred Terrence Alli, Livingstone Bramble and Saoul Mamby. That helped my growth as a professional.”

“The fight was on ABC Wide World of Sports and they had me doing a bunch of appearances, filming etc.,” Murray recalled. “I felt sluggish when I woke up [on the morning of the fight.]. I tried to shake the feelings [during the fight] but it didn’t work. Of all nights, that night, it was a bad day. I missed an opportunity.”

Murray rebuilt his career and hoped for a shot at IBF junior welterweight champ Pernell Whitaker. However, when Whitaker vacated to move to welterweight, Murray was lined up to face seasoned professional Rodney Moore for the vacant title in May 1993.

“Moore was a BS talker and he didn’t wanna shake hands – I wanted him bad,” said Murray, who harnessed his aggression to claim the title by 12-round unanimous decision. “I wasn’t running out to meet him. Intelligence over emotions, I learned the hard way [from the Alli loss].

“Winning the title was fulfilling because my amateur coach Robert Johnson said I could. He was like my dad. My friends brought my favorite person, Muhammad Ali, and my artist, Willie Hutch, to celebrate with me.”

“I lost to Jake on Friday the 13th, no way he should of beat me,” lamented Murray, who dropped a 12-round majority decision. “Mentally I wasn’t there, personal issues with the fiancée etc. I trained well… just one of those things – it happens. Bad timing.”

Murray looked to make another title run, but he was outhustled by Ray Oliveira (UD 10). That setback blunted his ambition, and although he bested Reggie Green (TKO 2) and a trio of former champs in Tony Lopez (UD 12), Rodriguez (TKO 7) and Bramble (UD 10), Murray suffered a second loss to Oliveira (UD 12) in April 1997.

Murray, 54, lives in Rochester with his wife and has seven children. He runs a youth boxing program at the recreation center and has his own gym called, “Natural Life and Wellness”, where he imparts his wisdom to the next generation.

BEST JAB
Terrence Alli: Alli had a short and fast jab. He used his jab quite frequently.

BEST HANDSPEED
Alli: I always liked Alli’s hand speed. Punching in bunches with short arms and speed is quite a combination to have.

BEST FOOTWORK
Alli: Side to side and feints well.

SMARTEST
Ray Oliveira: I would say he was a trap-setter. A fighter who plans as he works.

STRONGEST
Oliveira: Was a good volume puncher. He had an uncomfortable style of boxing I never quite adjusted to.

BEST CHIN
Ward: He took ’em, never moved and came forward – very tough. Juan Laporte was a great fighter. He had a strong chin but was very defense minded when we fought.

BEST PUNCHER
Ward: Ward hit me to the body with a hard shot that actually hurt.

BEST BOXING SKILLS
Rodney Moore: He made me fight on the inside. He made me want to outbox him. [I boxed] inside and out, on my toes, side-to-side.