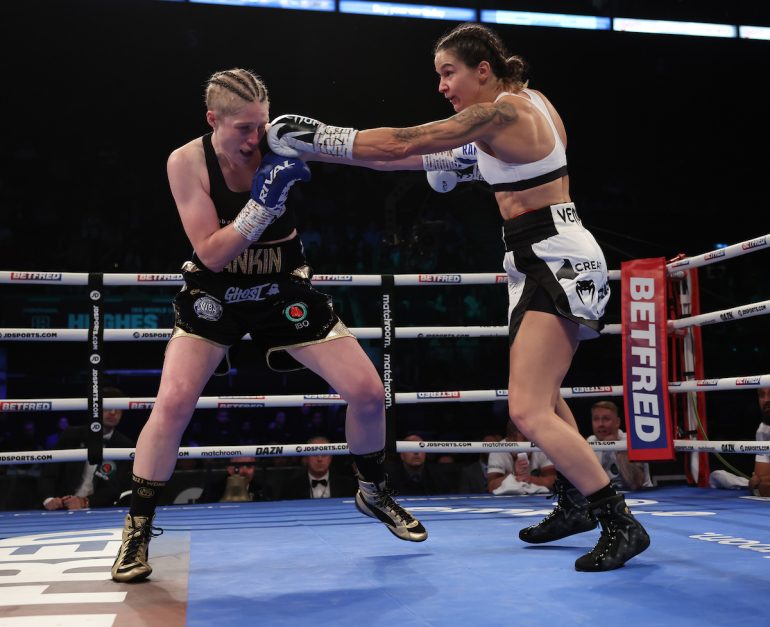 NOTTINGHAM, England — It was a decisive and victorious outcome as Terri Harper jumped on to the ropes to raise her hands before an ecstatic audience at the Nottingham Motorpoint Arena. The crowd, which chanted her name throughout the fight, responded in joyous outpouring as she was crowned WBA junior middleweight titleholder.

Rankin, the naturally larger fighter, mounted what was to be her second title defense against Harper. Harper, a former WBC junior lightweight titleholder champ, had come up three weight divisions to meet her opponent. While many – including Rankin – expressed doubt about her ability to fight the naturally larger woman, Harper moved with such self-assured speed, diving in with slippery combinations, that made it impossible to deny her.

Asked post-fight about her weight division jump, Harper smiled and shrugged: “I don’t think it was crazy. Confidence is confidence.”

Promoter Eddie Hearn of Matchroom Boxing added that a unification bout with Natasha Jonas may be in the next six to nine months, pointing out: ‘The fights Terri Harper has given us over the years. She lost to [Alycia] Baumgardner but it was a great fight, and tonight was another tremendous fight.”

Harper arguably won every round, moving in and out of Rankin’s reach with neat, beautiful combinations, opening a cut over Rankin’s left eye in the second round that periodically seeped down her cheek throughout. In the sixth, Rankin was maintaining her plodding, defensive stance but was unable to come up with answers to Harper’s boxing brain.

Harper has renewed hope of making some major fights now that she has gained the WBA title, particularly with Matchroom promoting her. Questions may still remain as to whether she can dominate in a division of much naturally larger opponents, but tonight, at least – a world champion again, and done with clarity and elegance (not to mention Rankin’s blood leaking down her top) –  she has the right to get any naysayers to pipe down.