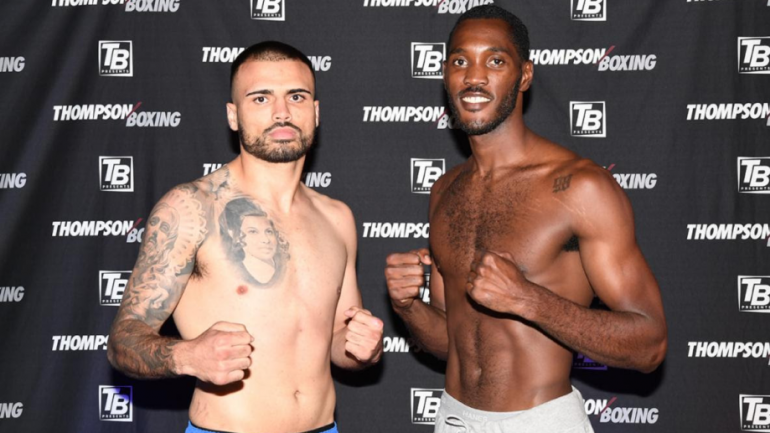 Joeshon James of Sacramento made a name for himself Friday night at the expense of fellow unbeaten prospect Richard Brewart Jr., he stopped in the seventh-round of Thompson Boxing Promotions card at the Doubletree Hotel in Ontario, California.

The main event was a compelling clash between middleweight prospects. Brewart had fought the better opposition on paper and had sparred against the likes Jaime Munguia in recent months, but James was the  more-effective fighter of the two.

During the opening round, the taller James attempted to measure Brewart with a jab, followed by a straight right hand to the head. Brewart was content to outjab Jones from the center of the ring.

Brewart began to attack the body during the fourth round, connecting with left hooks and right hands. Brewart would also follow up with right hands to the head of James.

Early in the fifth round, James dropped Brewart with a right hand to the head. Brewart beat the count, but fought on wobbly legs. Brewart fended James off by connecting to the body, also mixing his attack.

Both fighters were on the attack during the seventh round, attempting to land lead hooks or crosses to the head. Later in the round, James connected with a right uppercut, followed by a right cross. Moments later, a right hand dropped Brewart to the canvas in a corner. As referee Jerry Cantu administered an eight-round, trainer Henry Ramirez threw in the towel, saving Brewart from receiving further punishment. Time of the knockout was 2:49.

In the co-featured bout, featherweight Isaac Avelar of Aguascalientes, Mexico defeated Roberto Meza by unanimous decision. Scores were 77-75, 77-75 and 78-74 for Avelar, who improved to 17-5, 10 KOs.

The southpaw Avelar, normally a counter-puncher, was the aggressor throughout most of the fight. Meza attempted to match punch-for-punch with Avelar, finding some success as they both stood in the pocket and traded combinations.

A left hook from Meza connected early in the third round. Not to be outdone, Avelar connected with a sweeping left cross to the chin of Meza as the round concluded.

The pace of the fight slowed during the second half of the fight. At first, Meza initiated exchanges, but Avelar later closed the distance, unleashing a barrage of punches. Meza looked exhausted in the seventh round and looked worse for wear as the fight concluded.

In a minor upset on paper, lightweight Erick Garcia Benitez defeated Ruben Islas (6-1, 5 KOs) of nearby Rialto by unanimous decision. All three judges scored the bout 60-54 in favor of Benitez, who improved to 3-3, 1 KO.

The 28-year-old Garcia practices law in his hometown of Guadalajara, Mexico.

In an action fight, welterweight Miguel Angel Barajas broke down Esteban Munoz (6-3, 4 KOs) of San Bernardino, California before ending matters at 2:37 of the sixth round. Referee Ray Corona stopped the bout. Barajas (3-2, 1 KO), who also resides in Guadalajara, had not fought in over five and a half years.

In the opening bout of the card, junior featherweight David Salinas of Rialto improved to 3-0-1, 2 KOs by knocking out Phoenix’s Alexis Salido (2-4, 1 KO) at 50 seconds of the opening round.