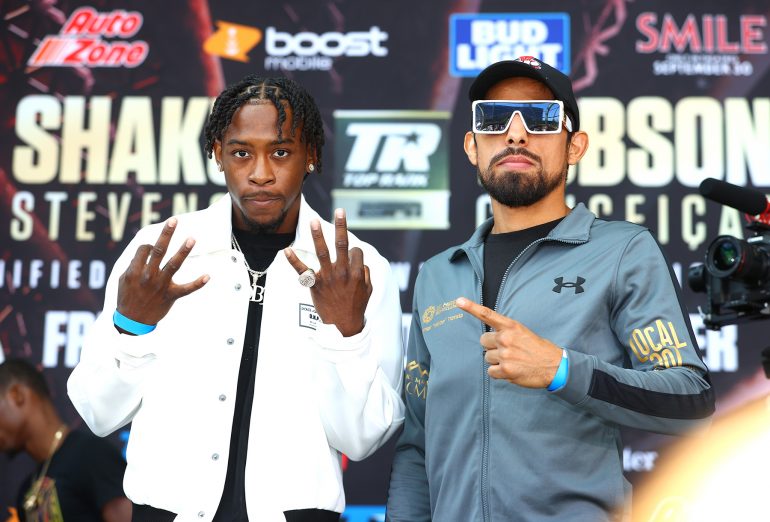 NEWARK, N.J. — Keyshawn Davis appeared to score a clean knockdown in round one of his fight Friday night against Omar Tienda Bahena, but the referee didn’t administer a count.

The 2020 Olympic silver medalist left no doubt in round 5, dropping the aggressive Mexican brawler with a replica of the first round punch before blasting him out with a follow-up flurry at Prudential Center in Newark, N.J. Referee Albert Earl Brown waved the bout off at the 1:38 mark, as Davis (6-0, 5 knockouts) pummeled Tienda (25-6, 18 KOs) along the ropes.

The victory was a welcome change of headlines for the 23-year-old from Norfolk, Va. Davis was fighting for the first time since April after withdrawing from two bouts this summer due to a stomach illness.

“It felt like a dream come true. I couldn’t believe I got a chance to perform [on a card of this] magnitude again being that I was out with health issues. I didn’t really know what to expect in myself, but I always said since I went pro, God has me. And he definitely had me tonight,” said the lightweight prospect Davis

Davis, who turned pro last year prior to competing in the Tokyo Olympics, lived up to his “Businessman” nickname, handling business behind his left jab. Davis picked his spots to split the high guard of the 34-year-old Tienda with his uppercut, and repeatedly hurt him with his counter right hand.

The stoppage was just the second for Tienda in over 30 bouts, snapping a seven fight winning streak that was built against soft opposition in Mexico.

“We’re working toward becoming a contender. My next fight will put me in that process faster. Then next year, we’re definitely going to be contending, and we’re going to be top 10, for sure.”

The bout was the co-featured fight underneath the Shakur Stevenson vs. Robson Conceicao bout as part of a Top Rank broadcast which aired live on ESPN.