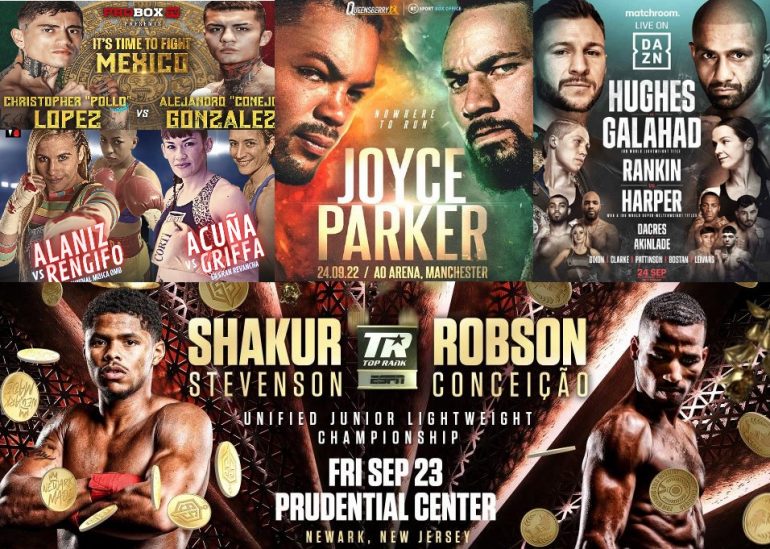 Major shock right off the gates: initially slated to have Stevenson’s junior lightweight WBC/WBO belts at stake, the fight is now a lightweight contest since the former Olympic medalist missed his weight by one and a half pounds.

What to expect in this fight: Conceicao is as dangerous as they come, and this disrespectful attitude by Stevenson may be all the Brazilian Olympian needs to psyche himself up for the second major shock of the weekend. I’d count on Stevenson to win on points, though.

Another former Olympian in Top Rank’s ever-growing roster of future headliners, Davis has been brought up quite fast for the company’s standards, and this should be a nice step up for him to see where he stands in the currently crowded 135-pound talent pool.

Time for Joe Joyce to deliver on the immense promise that he was touted to be. The tools are there, the crowd will be on his side, and his opponent will provide the perfect match to see where he stands in terms of development. A make-or-break moment for Joyce, and a huge opportunity for Parker to revive his career.

It’s graduation time for Serrano – again. The multiple champion and perennial pound for pound entrant is set to become The Ring’s inaugural featherweight champion should she win this fight. All signs point towards the chance that she will, even though she will be facing an unbeaten champ.

Where to watch it:  ESPN+

“Chucky” Alaniz is the future of women’s boxing in the smaller divisions, plain and simple. The unbeaten, ultra-aggressive young dynamo takes on a proven road warrior in a showcase bout that should be entertaining while it lasts.

The legendary Acuña, Argentina’s first-ever female boxer and the first fighter of any gender to hold titles from all four major organizations, is in a comeback trail that feels more like a farewell tour. Still, she makes history every time she climbs through the ropes, and that’s a sight worth seeing. And to top it all off, her son Maximiliano Chaparro will also appear in the undercard, in what has to be another historic first.

Where to watch it:  TyC Sports/TyC Sports Play

A bad-blood crossroads bout between two fighters seeking to reestablish their credentials. Galahad was once touted as the next big thing before losing his belt to Spain’s Kiko Martinez, and he is in a good position to regain that level.

Former junior lightweight titlist Harper is making a dramatic jump in weight to have a chance to pick up Rankin’s WBA belt in what is shaping up as a grudge match between them. Should be the most intriguing women’s fight of the entire weekend, if they deliver on their promise.

Where to watch it:  DAZN

Yeah, it’s one of those things that Floyd does, where he goes to Japan and throws a few punches in an exhibition and collects a few millions, you know? But hey, it’s boxing, it’s on TV and we should mention it, right? So we did. Check! Moving on.

Where to watch it:  Integrated Sports PPV, PPV.com, FITE

In theory, only the return of former champ “Popo” Freitas is billed as an exhibition, but Cyborg is a legend in the MMA circuit and she is testing the boxing waters in what could either be a one-off or the beginning of a second legendary career. Should be fun to watch, either way.

Where to watch it:  FiteTV