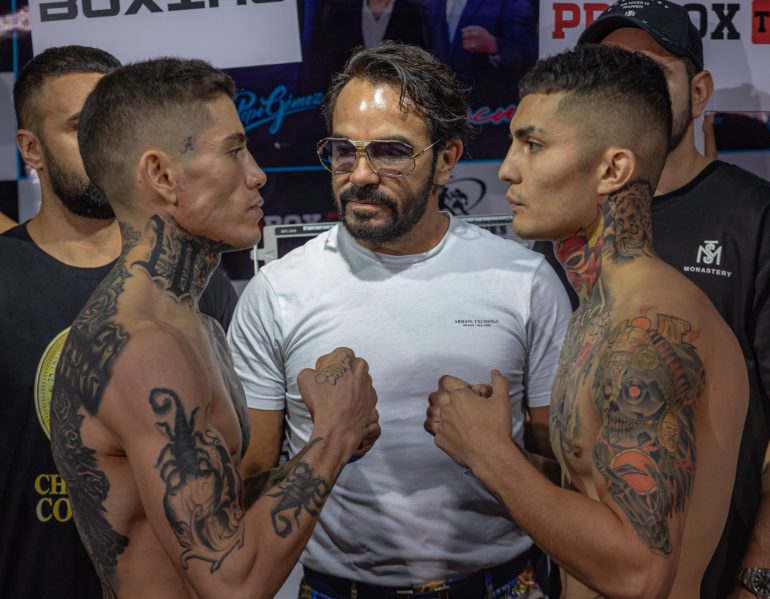 Christopher Lopez is eager to make a name for himself in a very competitive junior featherweight division.

The unbeaten junior featherweight hopes to make an impression on the boxing public Friday night when he squares off against Alejandro Diaz at the Grand Oasis Arena in Cancun, Mexico.

Lopez (15-0-1, 10 knockouts), who resides in the boxing hotbed of Guadalajara, Mexico, has fought modest opposition in building an unbeaten record. In his last bout on February 6, which also took place in Cancun, Lopez defeated Dixon Flores of Nicaragua by unanimous decision. In his previous fight on October 16, Lopez defeated former world title challenger Franklin Manzanilla by decision.

Lopez wants to make a solid impression in front of the former world champions, but also make a statement at the expense of Diaz.

“I am really happy to be here, and it is very exciting that (former) world champions will be calling my fight,” said Lopez at Wednesday’s press conference. “This is a big step in my career fighting (on) ProBox TV and it’s going to be a great night of fights.”

The 25-year-old has fought a handful of times at the Grand Oasis Arena, but will do so for the first time under a Marquez Promotions card. Marquez has joined former world champions Roy Jones, Jr., Antonio Tarver, Miguel Cotto, and Paulie Malignaggi in investing resources to fund ProBox TV along with founder Garry Jonas.

“I know it’s going to be a tough fight and I am very prepared. I am going to be very smart in my attack and I think my intelligence in the ring will win me the fight on Friday night.”

Diaz (11-4-2, 6 KOs), who resides in Mexico City, defeated journeyman Alan Salazar Blanco by majority decision in his last bout on July 23. Prior to the victory over Salazar, the 22-year-old had lost back-to-back fights to featherweight prospect Frency Fortunato and fringe bantamweight contender Liborio Solis.

In the undercard, a clash of junior featherweights residing in Mexico City will take place when Bryan Mercado Vazquez (22-1, 17 KOs) will face Victor Albino (14-1, 5 KOs) in a 10-round bout.

In the opening bout of the stream, 16-year-old Tony Curtis, Jr. of London, England will square off against Javier Calderon (1-3) of Mexico City in a four-round bout. Curtis, an amateur standout who will be making his pro debut, is trained by Roy Jones, Jr.