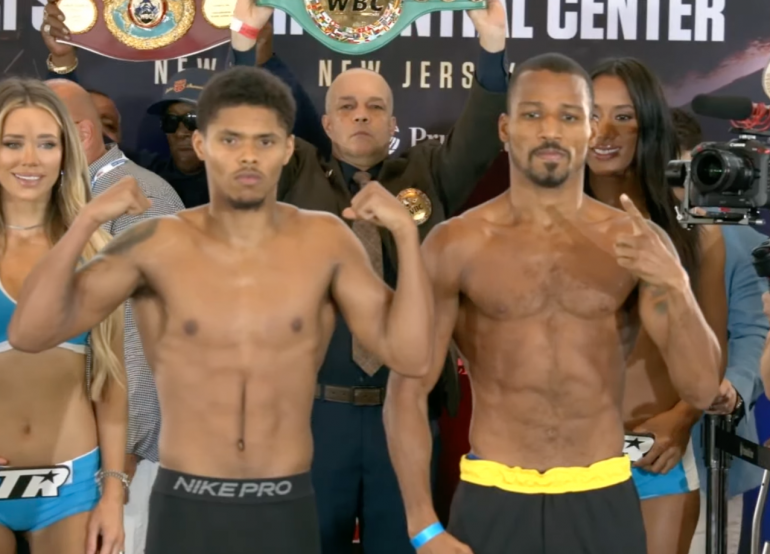 Shakur Stevenson has scarcely lost a round thus far in his professional career, but he lost one on the scales Thursday afternoon.

Stevenson, who entered the day as the RING’s junior lightweight champion, was stripped of his junior lightweight titles after weighing in at 131.6 pounds, well over the division’s 130-pound limit, for his homecoming title defense against Robson Conceicao, who weighed in under the limit at 129.6 pounds. Stevenson (18-0, 9 knockouts), who weighed in with just his underwear on, did not attempt to strip naked for a second attempt on the scales.

“I gave it my all. I’ve been professional my whole career and made weight, but my body just can’t make 130 anymore,” tweeted Stevenson. “My health has to come first. I’m moving up to 135 in my next fight.”

I gave it my all. I’ve been professional my whole career and made weight, but my body just can’t make 130 anymore. My health has to come first. I’m moving up to 135 in my next fight.

A Top Rank sources says a deal is still being worked on between the teams to allow the fight to proceed on Friday night.

Conceicao (17-1, 8 KOs), a 2016 Olympic gold medalist, would likely be the only fighter eligible win the WBC and WBO titles if he wins on Friday. Stevenson, who is eight years younger than his opponent at 25, would also likely have to give up part of his purse as part of his penalty for missing weight.

The 12-round bout will be Stevenson’s first at the Prudential Center in Newark, N.J. since his 2019 knockout win over Alberto Guevara. Stevenson would win the WBO featherweight title in his next bout, and has since moved up to annex two 130-pound title belts with wins over fellow Top Rank fighters Jamel Herring and Oscar Valdez.

Conceicao of Salvador, Brazil is fighting for a world title for the second time, having dropped a controversial decision to Valdez a year ago.

The fight will be will headline a card on ESPN, which will begin airing the main card live at 10 p.m. ET.