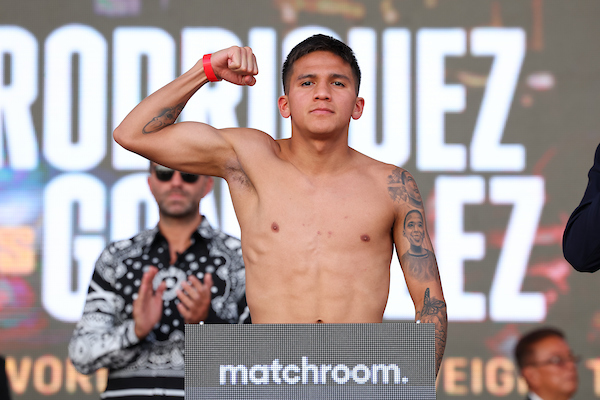 Trainer Robert Garcia believes the unbeaten Jesse Rodriguez needs more fights like his victory this past weekend over Israel Gonzalez to continue his development as a prizefighter.

“(It was a) great fight against a very tough Gonzalez,” Garcia, who has trained “Bam” Rodriguez since his pro debut in 2017, told The Ring Monday morning. “(It was a) great learning experience. These types of fights will prepare him for the bigger names (in the division).”

The San Antonio native Jesse Rodriguez, who is ranked No. 3 by The Ring at 115 pounds, had to fend off a strong challenge by Israel Gonzalez of Mexico Saturday night, winning a hard-fought unanimous decision at T-Mobile Arena in Las Vegas, Nevada.

There is talk that the 22-year-old Rodriguez could return to action on December 3 on the undercard of the rubber match between Ring Magazine junior bantamweight champion Juan Francisco Estrada and Gonzalez. The fight was officially announced this past Saturday on the DAZN PPV stream headlined by the clash between Ring Magazine super middleweight champion Canelo Alvarez and Gennadiy Golovkin.

Should Rodriguez fight on December 3, that would be Rodriguez’s fourth fight this year. Garcia will assess what is best for Rodriguez and make a decision after speaking with Rodriguez and other members of the team.

“We’re gonna let Jesse rest a couple weeks, then we’ll make a decision on his next fight,” said Garcia.

Rodriguez is the younger brother of secondary titleholder Joshua Franco, who may be in line to face the winner of Estrada-Gonzalez early next year. Franco is ranked No. 5 by The Ring and is also trained by Garcia.