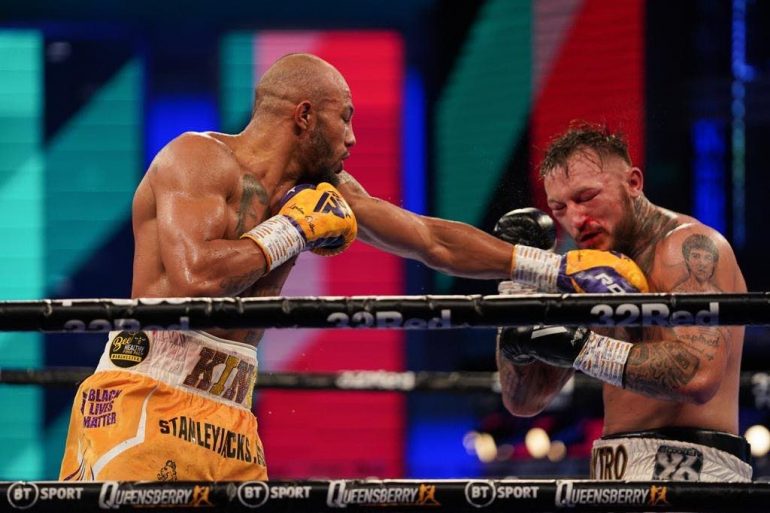 The anticipation builds as ‘King’ Lyndon Arthur (19-1, 13 KOs) trained in front of the media yesterday ahead of his clash against Walter ‘El Yacare’ Sequeira (25-9-1, 17 KOs) as part of a huge night of free-to-air boxing on Saturday September 17 at the University of Bolton Stadium, live on Channel 5 from 9:30pm.

Lyndon Arthur had the opportunity to put himself in front of the media yesterday afternoon, as the Manchester fighter showed plenty of spite during the open workout. To no one’s surprise, ‘King’ Arthur came in looking in top condition, but his sharp mindset is what is filling his trainer, Pat Barrett, with the most excitement ahead of fight night.

“Everything has been great during camp, I couldn’t have asked him to do anything better,” said trainer, and former British and European champion, Barrett . “He’s as mentally prepared for this fight as he is physically prepared, and when his mindset is in the right place he’s a dangerous man.”

There is no overlooking the job that needs doing on Saturday at the University of Bolton Stadium, live on Channel 5 from 9:30pm, but Arthur’s ambitions remain sky-high. Passing the test of Sequeira could mean a potential British title fight, or even looking further on and throwing himself into contention for international honours.

“Where he was going before was for the WBO title, he’s developing fantastically and he’ll be back in that position in no time,” said Barrett. “You’re about to see the best version of Lyndon there has been. Fiery attitude, extra spite in everything he does; he may be known for being calm but that composure is going to be paired with venom.”

Arthur has his eyes set on any and all opponents in the division, and Sequeira is just another obstacle in the way of his aspirations. He shares the same belief of fellow-Mancunian Ricky Hatton, who spoke highly of Arthur and what he can achieve. Rejuvenated and ready, Arthur 2.0 is coming according to the man himself, who cannot wait to go.

“Training has gone well, we’re here now, it’s just time to fight,” said Arthur. “I’m at that stage now where I just want to weigh in and get down to business.”

“I’ve been out the ring for a period, and I’m just looking forward to getting back in there and putting a performance in. Take him out is the plan, then move on to whatever is next.”

Arthur is immediately thrown back into the public eye performing on screens across the nation with the event live on Channel 5 from 9:30pm, but this is only the beginning for the ‘King’ as he goes in pursuit of reigning over the light heavyweight division. In typically composed mood, he is ready for the journey ahead which starts by handling Sequeira and the threat of his 17 knockout wins on his record.

“The dream is to win a world title, that’s where I’m at when looking at the bigger picture. In regards to the next fight, Dan Azeez is looking to fight and he’s got the British title so I wouldn’t mind that fight,” said Arthur. “We’ll see what happens though, I need to do the job on Saturday first then anything is possible,” he said.

“In regard to Saturday though? Be prepared. Knockout by Lyndon Arthur.”

Wasserman Boxing presents Lyndon Arthur’s (19-1, 13 KOs) explosive return to the squared circle as he looks to tame the tough Argentine, Walter Gabriel Sequeira (25-9-1) at Light Heavyweight. A fiery all-Welsh British Lightweight title affair will also feature between current champion Gavin Gwynne (15-2, 3 KOs) and Newport’s Craig Woodruff (12-6, 4 KOs), as well as “Trojan” Troy Williamson (18-0-1, 13 KOs) putting on the battle armour as part of a huge night of free-to-air boxing on Saturday September 17 at the University of Bolton Stadium, live on Channel 5 from 9:30pm.