Canelo Alvarez is not playing around with Gennadiy Golovkin this time 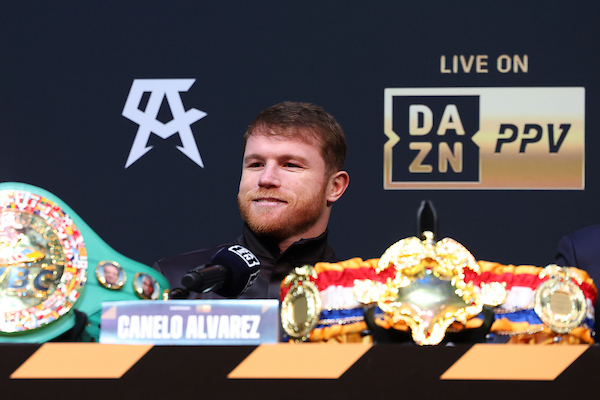 LAS VEGAS — Just beyond the shiny line of world title belts, Canelo Alvarez beamed Thursday afternoon at the AK Theater in the MGM Grand Casino during the final press conference for the third fight between him and Gennadiy Golovkin.

Alvarez’s eyes radiated a searing anger that he’s done very well upholding so far, before the two meet Saturday night at the T-Mobile Arena on DAZN.

Alvarez (57-2-2, 39 knockouts) is the first fighter in boxing history to become the undisputed super middleweight world champion. This will be the first foray at 168 as a pro for the 40-year-old Golovkin (42-1-1, 37 KOs), even though he had an extensive amateur past at 165.5 pounds.

On Saturday night, you get the impression nothing will get in the way of Alvarez, who’s been quite emphatic that he wants to knock out his rival. Alvarez has not let it slip everything “GGG” accused him of after their last fight in 2018. Compounding Canelo’s motivation was the surprising unanimous decision loss in May to WBA light heavyweight titlist Dmitry Bivol.

“He likes to talk a lot of s—t and I’m here now in front of him,” Alvarez told The Ring. “It is personal. It is more motivation to do my job. I will give him credit. (GGG) is one of the best I faced. I wanted to make this fight for the fans, and like I said, he’s one of the best fighters I have ever faced.

“But I think I’m the best fighter in the world, because nobody does what I do in boxing. Nobody take the risks I take—and these are ricks that I don’t need to take. It’s no secret. I just want to punish him. I want to punish him really hard. That’s what my focus is on.

It’s been four years since their rematch, won by Alvarez on a majority decision, though disputed by some. Agitating him further is the performance against Bivol. Alvarez is better than that—and he knows it.

It’s gnawed at him for months.

“Yeah, of course, nobody likes to lose,” he said. “Nobody wants to lose. I feel a lot of pain because I love what I do and I don’t want to lose, right? But it is what it is. You need to keep (moving) forward and keep fighting. That’s life.

“I will tell what it has done, I do feel hungrier. I feel more dangerous now. My training hasn’t changed. I still train 100 percent.

“But now I’d say I’m more mature. I’ve got a lot of confidence to go into it, so that’s what’s different about things now. I’m just gonna fight my fight. I’m gonna fight the way that I know how. I just have to focus what I do.

“I kind of like (when opponents talk trash), because I train harder and I go into the fight this feeling like I’m more dangerous. My goal is to end the fight before 12 rounds.”