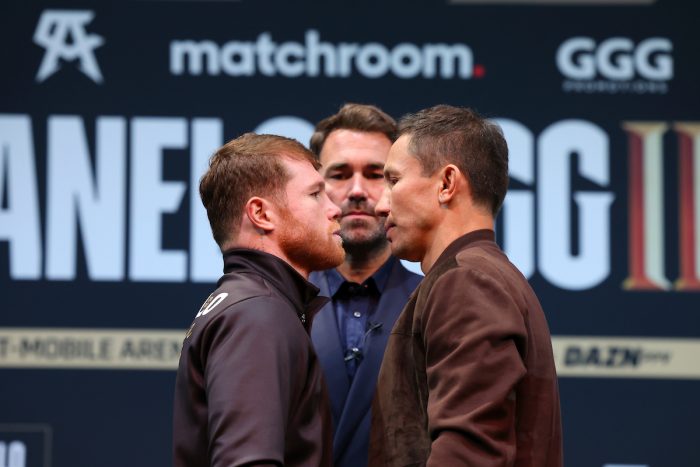 LAS VEGAS — It somehow gets sideswiped that Gennadiy Golovkin’s extensive amateur career includes a multitude of fights at 165.5 pounds, very close to the 168-pound limit.

So, the weight difference in making his super middleweight pro debut Saturday night at the T-Mobile Arena on DAZN should not be an issue.

Golovkin (42-1-1, 37 knockouts) knows that he may be taking the brunt of Alvarez’s loss to WBA light heavyweight titlist Dmitry Bivol in May. If Alvarez beat Bivol, he mentioned the possibility of climbing to even higher weights to challenge heavyweight world champion Oleksandr Usyk for his IBF, WBA, WBO and Ring belts, or possibly jump to cruiserweight to meet WBC titlist Ilunga Makabu.

“And even now, he continues to say that he’s ready to take any challenge, that he’s not afraid,” Golovkin said on Tuesday in a conclave with a small group of reporters. “Maybe he just wants to kind of save face. But at the same time, we see that what he said during press conferences showed that he didn’t take Dmitry Bivol seriously and that fight seriously. So, I think he drew his conclusions that this loss kind of brought him back to Earth. And as a result, he will change.

“He probably lost touch with reality, and believed that he was invincible.”

Secondly, Alvarez had become a far more complete fighter after his initial loss to Floyd Mayweather in September 2013, and he’s openly stated he’s learned more since his unanimous-decision setback to Bivol.

Alvarez became the first fighter to unify all four super middleweight titles. He’s not about to give them up. The fans wanted to see the rivalry end with this trilogy.

Alvarez is more than happy to oblige.

“Look, I’m happy to be involved in this fight because everybody wants to see this fight,” he said. “I think I’m the best fighter in the world because nobody do what I do in boxing. Nobody take the risks like me, and I don’t need to take risks – please. But I love challenges, and that’s it. And I feel I’m still the best.

“I just want to punish him really hard. So, that’s the only thing happening in my mind. And I’m very close to doing it.”

Against a 40-year-old with diminished skills from the last time these two fought, it could happen.