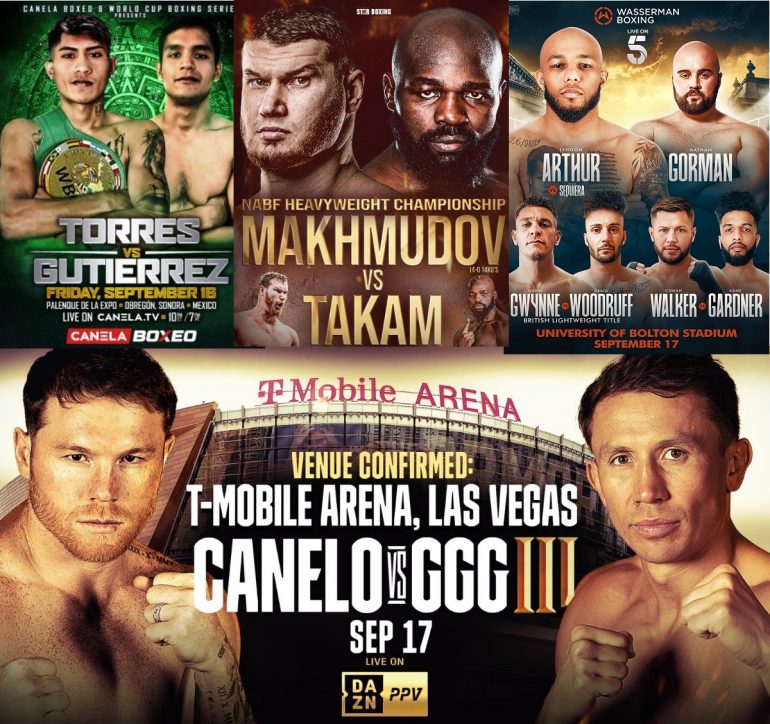 Makhmudov will attempt to continue on his all-KO unbeaten streak against step-up foe and former Olympian Takam, while Butler will be trying to bounce back from two losses in a row against upset-minded DeLuca.

Bentley and Morrison will be clashing in a high-stakes bout with the British middleweight title on the line in what appears to be a solid, even-money matchup.

Where to watch it: BT Sport

Switzerland’s Huber steps in to face the unbeaten Ljungqvist replacing South Africa’s Chris Thompson, who got injured in training. A “bridgerweight” (not recognized by The Ring) regional belt is on the line for this one.

Whenever you have two unbeaten Mexican young guns putting it all on the line for pride and country, you know that you’ll see plenty of action, left hooks to the body and visits to the canvas. This intriguing clash promises that, and more.

The fight of the week, without a doubt, and the likely end of a great saga between these two true warriors, with the Ring belt and all four major belts as well on the line. The first one was a draw and the second one was won by Canelo, but the results can go either way depending on who you ask.

What to expect in this fight: With both of their legacies at stake, expect Canelo (who has the weight and age advantage on his side) to shake off his painful loss to Dmitry Bivol in his previous fight with an extraordinary performance. In any case, it will be a fight to watch – and to remember as the end of a great rivalry.

Rodriguez will put his WBC belt on the line in an intriguing fight while he waits for a possible challenge from the one Gonzalez he would love to face – the great Chocolatito.

Where to watch it: DAZN PPV

‘King Arthur’, he returns to the ring for the first time since his KO defeat to Anthony Yarde and takes on Argentine road warrior Walter Sequeira in a solid test at this point of his career.

Interesting bad blood matchup between two Welshmen with the British title on the line. Current titleholder Gwynne should have the upper hand in both experience and skills in this one.

Peralta, a former two-time Olympian for Argentina, was robbed blind in his last fight in Canada against Rozicky. It would be interesting to see if he finally gets his pro career going to the next level, and a win against Maldonado would help a lot.

Where to watch it: TyC Sports Play

Brazilian former Olympian and once-promising prospect Falcao is still figuring out how to rebuild his career after his upset loss to Christopher Pearson back in 2019. Looks like he’s serious about stepping up his game, since already has a fight lined up for late October as well.

Unbeaten Irish sensation Coyle is being brought up nicely against solid opposition, and the battle-hardened Ortiz will give him just the challenge he needs at this point of his career.

Local hero Lerena continues his heavyweight campaign against Poland’s Wach after campaigning at cruiserweight for most of his career.