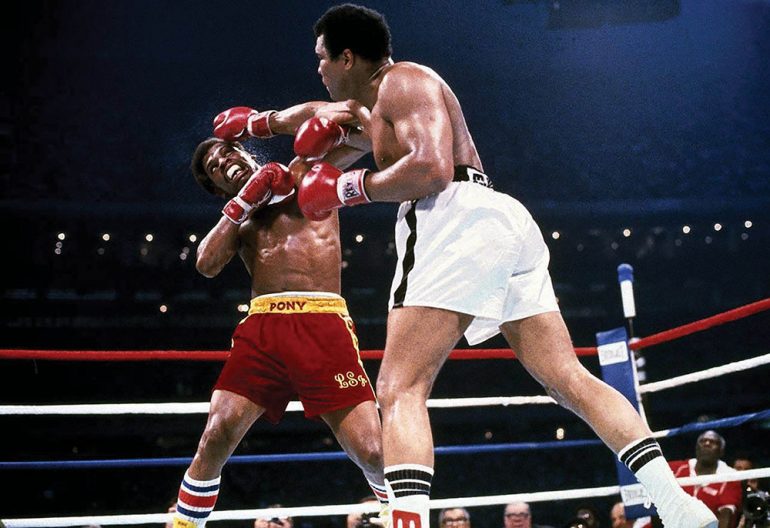 Muhammad Ali tags Leon Spinks in their rematch.
15
Sep
by The Ring

It was “The Battle of New Orleans.”

On September 15, 1978, Muhammad Ali scored a convincing 15-round unanimous decision over Leon Spinks to regain Ring and WBA heavyweight titles at the Superdome in New Orleans. Scoring was on a rounds basis and favored the winner 11-4, 10-4-1 and 10-4-1.

Seven months earlier, Spinks scored one of the biggest upsets in boxing history when he outpointed Ali in Las Vegas. Despite being an Olympic champion, the 24-year-old Spinks was just 6-0-1 as a pro and was given next to no chance of victory.

The loss was an embarrassment to Ali, who vowed to become the first three-time heavyweight champion in boxing history.

While he got himself into better shape for the rematch, Ali, 36, was nowhere near the fighter he’d been. He was now in serious decline. For the most part, “The Greatest” doubled and tripled the jab, shot the right hand and fell into a clinch.

Referee Lucien Joubert penalized Ali the fifth round for holding and could have done worse. However, with a then-indoor record crowd of 63,350 fans packed inside the Superdome and an estimated 90 million viewers watching around the world, it was going to take a brave man to continually admonish Muhammad Ali.

Despite Ali’s spoiling tactics, he did show a few flashes of his prior brilliance. The challenger shook Spinks up with a series of rights in Round 12 and looked close to scoring a knockdown. Ali just didn’t have the energy levels to follow up effectively.

To this day, Ali remains the only heavyweight to capture the lineal championship on three occasions. He would retire in June 1979 before making an ill-advised return against Larry Holmes in October 1980.

In his next fight, Spinks was stopped in a single round by South African bomber Gerrie Coetzee.