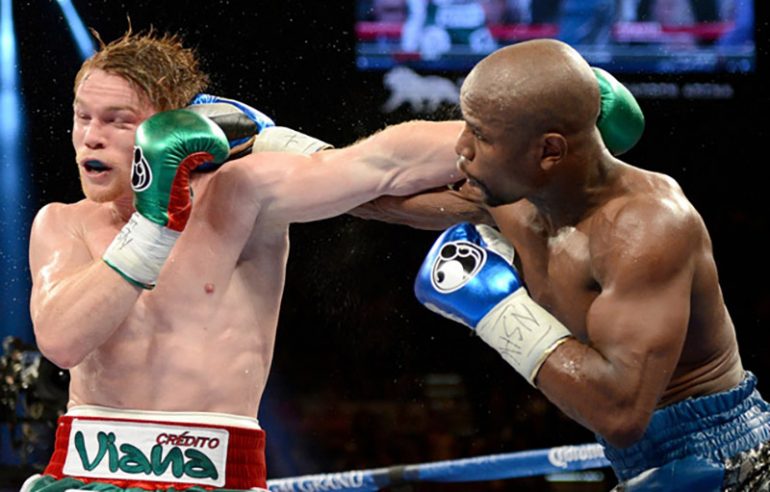 Canelo was outpointed by Mayweather in a 2013 superfight aired on Showtime. Photo by Naoki Fukuda
14
Sep
by The Ring

A master at work.

On Sept. 14, 2013, Floyd Mayweather added Ring and WBC junior middleweight titles to his WBA version by posting a dominant 12-round majority decision over Mexico’s previously unbeaten Canelo Alvarez. The official scores were 117-111, 116-112 and 114-114.

Now, the words “dominant” and “majority decision” rarely – if ever – appear in the same sentence. However, the official result does not tell the story. Judge C. J. Ross, who had the temerity to score this bout six rounds to six, never worked again.

This was a landslide victory for Floyd Mayweather.

The scoring was not the only controversy. Despite a treasure trove of junior middleweight gold being up for grabs, the bout was contested at a 152-pound catchweight. Always the businessman, as well as the legitimate A-side, Mayweather jumped at the chance to put the champion – and the larger man – through some additional discomfort in training camp.

On the night, however, this fight was about skill, speed and reflexes, which Mayweather had in abundance. Canelo landed the odd meaty headshot, and enjoyed success to the body, but he was unable to inflict serious damage. Mayweather was a genius at controlling distance and he picked his punches beautifully.

A win was way out of reach for Canelo long before the bell to begin Round 12. Only 23 years of age at the time, the Mexican star would ultimately look at this experience as a learning curve. Mayweather, still the boxing savant at the age of 36, was on dazzling form in one of the biggest fights of his career. There were some ringsiders who scored every round in his favor.

“Mexico has had some great champions and Canelo is a true champion,” said Mayweather afterwards. “I just listened to my dad, he had a great game plan – take my time.”

“He’s a great fighter,” acknowledged Canelo. “He’s very experienced, very intelligent, very elusive – it’s as simple as that. The frustration was getting to me. I just didn’t know how to catch him.”