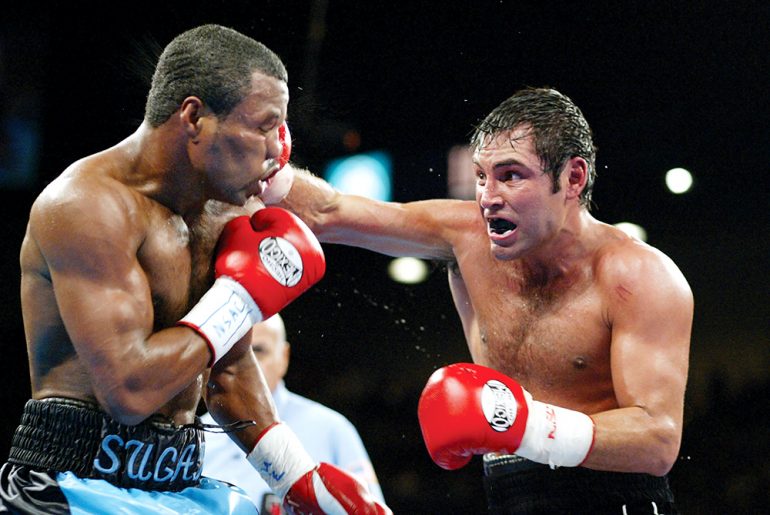 De La Hoya fought a very smart fight in the Mosley rematch but fell short on points. (Photo by Chris Polk/Getty Images)
13
Sep
by The Ring

Opinions varied on this battle of modern-day boxing legends.

Mosley had already annexed world titles at lightweight and welterweight. His coming out party was a 12-round split decision win over De La Hoya at the Staples Center in LA on June 17, 2000. It was a sensational performance that catapulted the Pomona star to pound-for-pound supremacy.

De La Hoya bounced back to win a junior middleweight title from Javier Castillejo and unified by halting long-time nemesis Fernando Vargas. Despite close points defeats to Felix Trinidad and Mosley, “The Golden Boy” was now a five-weight world champion and he remained the sport’s biggest attraction.

Having lost two decisions to old amateur rival Vernon Forrest, the 32-year-old Mosley was in serious need of a big win. There was still no opponent bigger than De La Hoya.

While the first encounter was a ferocious shootout, the sequel was a more tactical affair. De La Hoya worked the jab, released fast flurries and used the ring. Mosley pursued, applied pressure and, every once in a while, landed a big shot.

However, the pendulum swung in the challenger’s favor in the ninth round. Having hurt De La Hoya to the body, Mosley went all out for the finish, nailing his foe with some terrific head shots. He didn’t manage to get De la Hoya down, but it was his biggest round by far.

Both men had their successes down the stretch, but the body language at the final bell suggested that a De La Hoya win was expected.

The judges went the other way.