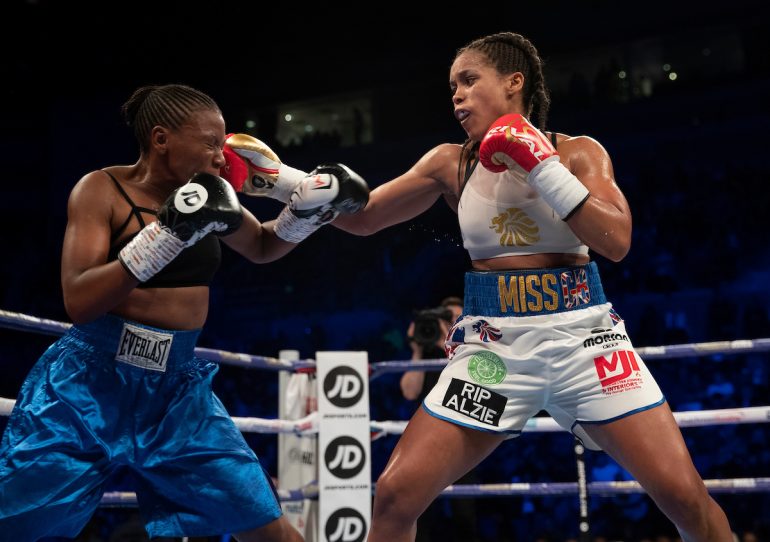 September will be a historic month for women’s boxing, even with the suspension of the Shields-Marshall Mayer-Baumgardner doubleheader. And things got to a great start with some interesting fights during the past weekend.

In the most notable one, Natasha Jonas became a unified junior middleweight champion with a win over Sweden’s unbeaten titlist Patricia Berghult, and now holds half of the belts available out there. Even though she weighed less than 150 pounds for both of her bouts at this weight, Jonas has been stellar in her job, and she was almost unanimously promoted to No. 2 from her previous position at No. 4 by the panel, with Berghult being displaced to No. 3.

“Natasha Jonas may have had a bit of a slow start but she was on fire from about the third round on. (She) was fit, strong, and on point with a truly balanced performance,” said historian Malissa Smith, while columnist Mark Jones argued that “Jonas has carried her power from 130 and looks comfortable at 154. With the additions of Terri Harper, Mary Spencer, and Jonas, the super welterweight is suddenly interesting.”

The move also puts Jonas in position to dispute the Ring junior middleweight title currently in the hands of Claressa Shields, soon to be left vacant due to Shields’ inactivity at the weight.

A few divisions below, Erika Cruz-Hernandez proved that her first win over Jelena Mrdjenovich was no accident, and soundly defeated the Canadian former champ in a one-sided win in Cruz-Hernandez’s native Mexico.

The win failed to move Cruz-Hernandez above featherweight juggernaut Amanda Serrano, but it did cause Mrdjenovich to lose one position, swapping places with Elina Tissen in a move that may prove only temporary once Serrano takes on No. 3 Sarah Mahfoud in early November and one of them ends up exiting the Top 5 to become the Ring’s inaugural featherweight champ.

“The fight between Cruz-Hernandez and Jelena was the reaffirmation of the generational change,” said writer Yesica Palmetta. “Jelena didn’t do anything wrong but Cruz already knew how to deal with her.” Lupi Gutierrez-Beagle expanded by saying that “Hernandez wasn’t a fluke and once again it’s a clear passing of the baton, or title belt in this case,” and Smith added that “the ever powerful and dangerous Mrdenovich had her most lethal weapon, her right hand, neutralized by Cruz-Hernandez all night. (Erika) would certainly give Serrano a competitive fight, but if she hopes to have a chance, she will need to tighten her defense after she throws combinations.”

Also this week, an all-women’s card (almost, save one or two bouts) took place in Japan, with no less than three of our rated atomweight fighters seeing action.

In a string of upsets, Yuko Kuroki defeated No. 5 Nanae Suzuki, Mika Iwakawa decisioned No. 3 Ayaka Miyao, and No. 4 Eri Matsuda won her fight over Kaori Nagai by decision in eight rounds. Against this backdrop, it became imperative to yield the floor to our Japanese correspondent Yuriko Miyata for a deeper insight on the situation.

“I would put Iwakawa above Kuroki as she secured the win in a much more difficult fight,” said Miyata. “Although Iwakawa was a little over-cautious, she has good timing on her right counter and is to be called the best 102 pounder currently in Japan with that win. Former WBC minimumweight champion Kuroki showed her skill level in her game plan on busy side steps to avoid non-stop aggressor Suzuki throughout the fight. Tall southpaw Matsuda, who got a clear win this time after two failed attempts to world titles, is still a top candidate to become our next champion.”

Yuriko’s motion was unanimously accepted, and the ratings were rearranged accordingly.