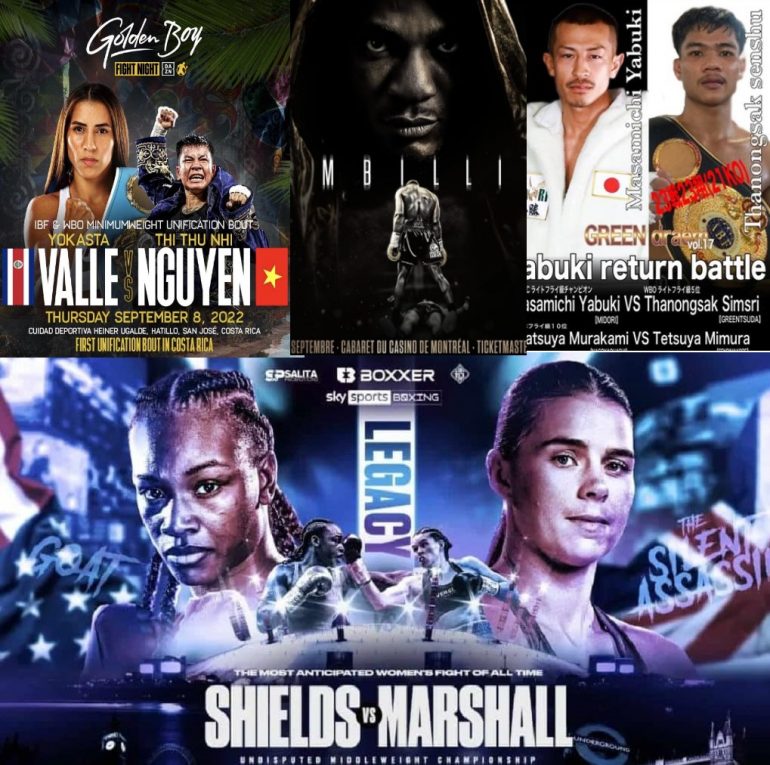 September will be a huge month in the history of women’s boxing, and this terrific bout kicks off a great week, with Valle hosting Vietnamese former amateur standout Nguyen for an IBF/WBO unification on the road to having an inaugural Ring champion in the division someday soon.

An intriguing rematch between two battle-hardened Mexican veterans will be the co-main event of the evening. The unbeaten Ruiz had to settle for a technical draw in their first encounter after an accidental clash of heads opened a cut on Osorio’s face, and the bad blood has been boiling since then. Let’s hope for a better result this time around.

The unbeaten Wagner made it to 12-0 back in July when his foe Fernando Silva quit on his stool, but he figures he will have a much tougher test against Mexico’s Sanchez in this battle of young lions.

The unbeaten “Bulletproof” Glanton will take on Mexico’s Aguilar in a main event that will feature something called a WBO “global” title. Which is exactly what it sounds like: a planet-sized rip-off. Fight should be good, though. Two hungry, heavy-handed bangers looking to make the most out of their time under the spotlight. Blink not.

Unbeaten French-Canadian prospect Mbilli, rated No. 5 by The Ring at this weight, continues his march toward a world title fight by taking on “The Axeman” Ware, a dangerous foe who is 2-2 in his last 4 bouts.

“Kid Dinamita” Roca is an unbeaten young gun with a solid past as a member of the Argentine national squad. He will be taking on once-beaten Bolivian puncher “Machine Gun” Roca, who is on a quest to become his country’s first-ever world champ one day.

Former multiple champ Dionicius has been in the ring with some of the best in the bizz, and is always a pleasure to watch. This bad-blood rematch should be a lot of fun.

Where to watch it: TyC Sports Play

Clearly the fight of the week (as the main event of a historic all-female card), likely a Fight of the Year candidate, and one of the most anticipated women’s boxing matchups in history so far. Marshall is the only woman to have defeated current Ring champ Shields (as an amateur, and a very long time ago) and remains a thorn on Shields’ side. The grudge match was destined to happen.

What to expect in this fight: The eyes of the entire world will be upon them, and they will deliver. Expect a war, with blood, cuts, foul language and visits to the canvas included.

In terms of pure boxing action and emotion, this one has the potential to equal or even top Shields-Marshall or any other women’s fight in recent memory, for that matter. Mayer’s unification bout against Maiva Hamadouche was a FOTY candidate regardless of gender, and the bad blood with Baumgardner is all too real. Should be a war.

What to expect in this fight: Mayer is the slight favorite to retain her inaugural Ring junior lightweight title, but don’t bet your rent money on her just yet. This one could be very, very close.

Unbeaten Indian-Canadian Bhatti will have a solid test in Albanian-Italian Vrenozi in a card full of solid young prospects.

Thailand’s Simsri travels to Japan to put his unbeaten record on the line against Yabuki, who recently went 1-1 with Kenshiro Teraji, winning and then losing the WBC junior flyweight belt in the process.