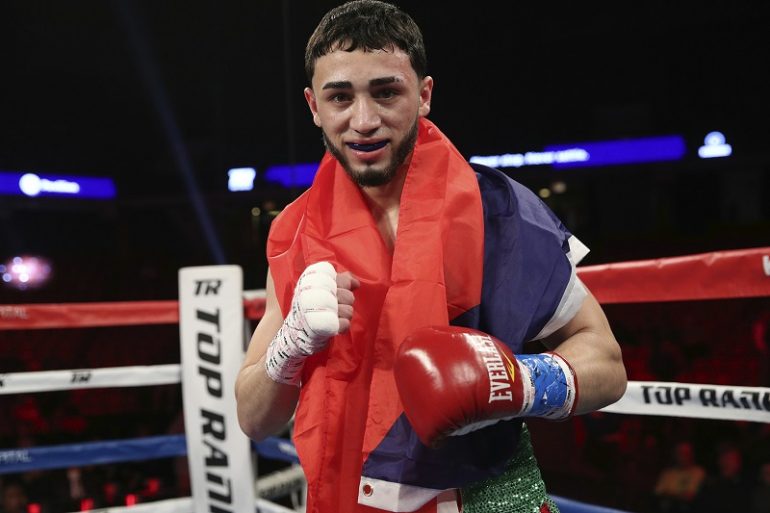 Joseph “Blessed Hands” Adorno knows what he did wrong. The junior welterweight from Allentown, Pennsylvania, had a promising future that he’s trying to rekindle. The first step is recognizing mistakes. It’s good time to catch them, too, because Adorno is 23 and the window is still very much open to what he could do in boxing.

Adorno is a talented fighter. But like many talented, young athletes, the stumbling block they often encounter is themselves. In the recent past, he did not train the way he was capable of training. And he knows it. He did not diet and discipline himself between fights. And he knows that, too. He wasn’t getting sound advice from his team, and that knowledge forced him to severe ties with his father, Anibal.

Trained the last three fights by Chino Rivas, Adorno will be getting another chance on a large stage, once again on short notice, when he fights Hugo Roldan in a 10-round junior welterweight co-feature on Showtime’s ShoBox: The New Generation tripleheader from Bally’s Event Center in Atlantic City, New Jersey, on Friday night.

Adorno (16-1-2, 14 knockouts) is riding a modest two-fight winning streak and replaces Roldan’s original opponent, Shinard Bunch. Though before winning his last two fights, Adorno was 0-1-2, losing his first fight to the exceptional Michel Rivera in March, after consecutive draws against Hector Garcia Montes, in January 2020, and Jamaine Ortiz, in April 2021.

“The only one of those fights I really want back is the Jamaine Ortiz fight,” Adorno said. “I needed the Rivera fight. I learned a lot from that loss. That was a learning experience. Rivera told me after the fight he trained for four months. I got three weeks’ notice for Rivera and had to lose 35 pounds. I wasn’t training for the Rivera fight. I was cutting weight. I never went 10 rounds before, and I had a lot going at once.

“For Ortiz, it was me and Jeremy, my little brother, training ourselves. It was during COVID, and my parents broke up and I’m not going to lie, I needed the money, and I took the fight. My dad is out of the picture. Chino has been training me since the Rivera fight. I only took two weeks off since my last fight. When I got the call for Roldan, I was ready. I feel ready. I got in four weeks of training. I was in my own way. I’m not going to make excuses. I should have trained between fights.”

After the Ortiz draw, Adorno admits, he did not train for seven months. He got sloppy. He gained weight. He says he only trained when Top Rank called. Top Rank stopped calling because they dropped him. Adorno has since been picked up by promoter Vito Mielnicki Sr., Vito Mielnicki Jr.’s father, and is managed by David McWater’s Split-T management.

“I wasn’t right going into the Ortiz fight, and my father and my mother split, and my father closed the gym, and Jeremy and I worked out with each other, and all we did was run and lose weight,” Adorno said. “The same thing happened with Rivera. I was fat. I wasn’t thinking right. I had to lose weight. Since my father closed the gym, we haven’t spoken. I have no connection with my dad at all. It’s 23 years now of the same thing over and over. I needed to move on and I have with Chino.

“After the Rivera fight, I was really upset, because I let everyone down. I always thought I was going to be great, but how can I be great if I wasn’t putting in the work. I’ll admit, Rivera beat me, but I saw that fight 6-4. Once I got home from that fight, everything would have been way different.”

Adorno took a week off and has been in the gym ever since, working with Rivas in Cherry Hill, New Jersey. He says he does not know much about Roldan (21-0-1, 7 KOs), though he knows he is awkward. Adorno is a counter puncher and may be the aggressor Friday night. His weight is good.

“I tell myself every day to keep going and keep running,” Adorno said. “I’m around guys working hard. Back in Allentown, I would work when I wanted. Now, I work every day to keep up with everyone around me. I’m glad everything worked out because I’ve been my own worst enemy. I needed to change that.”