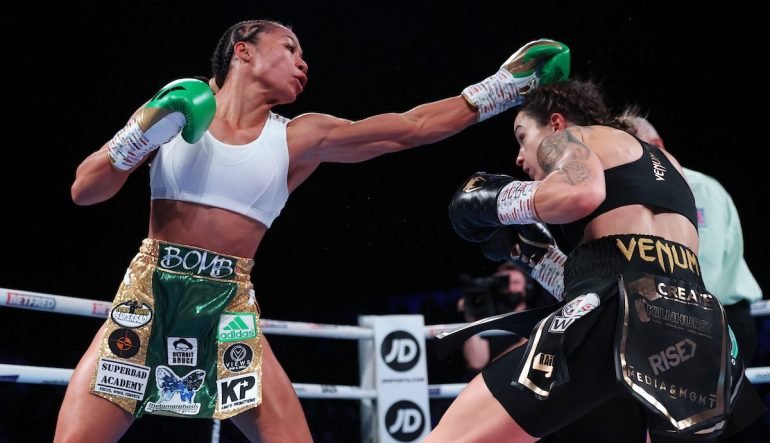 Alycia Baumgardner liked to punch things growing up. The pint-sized dynamo was a great all-round athlete as a child. She dabbled in gymnastics, wrestling, softball, track, and mostly boxing, which she started when she was eight. She had many boy cousins and she hung out with them. The 28-year-old does not get intimidated.

So, when she faced Ring, IBF, and WBO junior lightweight titleholder Mikaela Mayer on Tuesday, Baumgardner, the WBC titleholder who is The Ring’s No. 2-ranked junior lightweight, felt her taller foe radiate fear. The lightweight unification showdown will take place at the O2 Arena, in London, England, this Saturday on ESPN (2 p.m. ET/11 a.m. PT) and on Sky Sports in the U.K. (7 p.m. GMT).

Baumgardner, known as “The Bomb,” feels she has several advantages over Mayer. Confidence being foremost.

“It was a little intense when we met for the first time (on Tuesday) and it told me where I belong,” said Baumgardner, who’s being trained by former WBC junior middleweight titlist Tony Harrison, who works with Baumgardner in Detroit, Michigan. “It told me (too) that she’s scared, she’s threatened, and it tells me she knows that she’s going to lose on Saturday. That’s all I needed to see. I go off energy. She’s definitely nervous. Her body language told me. I read people easily.

Baumgardner is aware that Mayer is considered the “A side,” which also doesn’t matter to her. She’s been in title fights before.

“It doesn’t matter, I know what my assignment is, that’s to beat her,” she said. “My fight against Terri Harper (when Baumgardner won the WBC belt by TKO 4), I was the ‘B side.’ It’s why I say it doesn’t matter. Look what happened to her. I had a great camp for this fight. I’ve been fighting for 20 years. I feel I have everything over (Mayer). My technique, my experience, this is a lifestyle for me. I wrestled first when I was five. Boxing is something that stuck. We made it a reality. My parents saw something special about me. I was a naturally gifted athlete, and my parents knew how to push that in me.”

Baumgardner feels she has faced and overcame adversity when she lost to Christina Linardatou by split-decision in 2018 in a step-up fight. She took on a 9-1 fighter, and Baumgardner still feels she won. She says that loss does not define her. She knows what it is like to lose and what it’s like taking a two-year layoff (during the COVID-19 pandemic, when she underwent surgery to repair a partially torn ACL in her right knee that she injured during sparring). She says Mayer is an “entitled” champ, who has never faced any adversity.

Baumgardner is hoping Mayer comes forward and engages. She says she is prepared for anything Mayer brings.

“You’re going to see a fight,” she promised. “I know she has an amateur style, so she’s going to be on her bicycle the whole time. For me, it’s going to about cutting the ring off and it means throwing my punches in bunches. If she wants to come forward, we can make this a dog fight. I’m here to put her on the canvas and make sure that she doesn’t get up. With this fight, you’re going to see someone getting stopped.

“I gave her three options: her coach is going to throw I the towel, the ref is going to stop it, or I’m knocking her out. It’s going to be great. Everyone is going to be in for a treat. I’m on weight. My weight is good. She looks like a dried-up raisin (laughs).

“Mayer’s face is telling me she is afraid. My only plan is to keep moving forward and she’s in my way.”