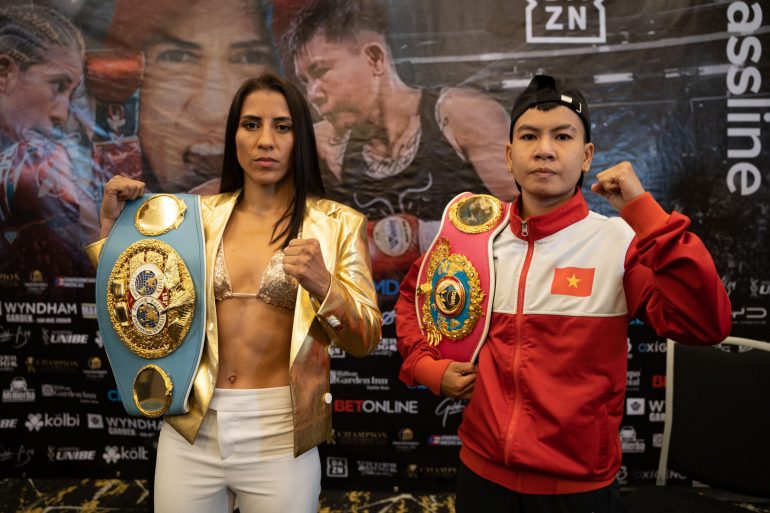 Valle (25-2, 9 knockouts) will be making the sixth defense of the IBF title against Nguyen. In her last bout on June 11, Valle defeated Lorraine Villalobos by unanimous decision. The win over Villalobos came 11 weeks after Valle defeated Japan’s Sana Hazuki by decision.

The 30-year-old recently signed a co-promotional deal with Golden Boy Promotions. Valle, who is ranked No. 2 by The Ring at 105 pounds, is also promoted by MarvNation Promotions.

In the co-main event, junior bantamweights Sonia Osorio (113.8 pounds) of Mexico City and Adelaida Ruiz (115 pounds) will square off in a 10-round bout.

Tonight’s clash between Osorio and Ruiz is a rematch from their fight on March 21 of last year. The fight ended after the second round after the ringside physician recommended the fight be stopped on the account of Osorio suffering a terrible cut above her left from an accidental clash of heads.

Osorio (15-7-2, 4 KOs) lost to Angela Nolasco by unanimous decision in her last bout on October 16. Notable fights on her ledger are decision losses to Ring Magazine women’s flyweight champion Marlen Esparza and to Seniesa Estrada.

Ruiz (11-0-1, 6 KOs), who resides in Los Angeles, dropped Edith de Jesus Flores twice en route to a knockout win in her last fight on March 25. She has won her last two bouts by knockout since the Osorio fight.

Unbeaten super middleweight Raquel Miller (11-0, 4 KOs) of San Francisco, California, who is ranked No. 5 by The Ring at 168 pounds, will square off against Brazil’s Beatriz Aires Da Cunha (2-0, 2 KOs) in an eight-round bout.