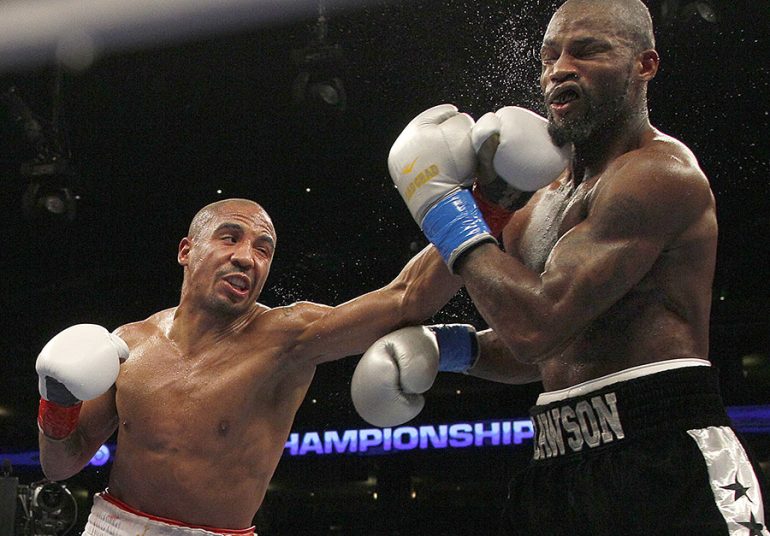 Chad Dawson (right) was among the series of elite fighters Ward vanquished in and following the Super Six tournament. Photo by Jeff Chiu/AP
08
Sep
by The Ring

On Sept. 8, 2012, Andre Ward sparkled in a 10th-round stoppage of Chad Dawson to retain Ring, WBA and WBC super middleweight titles at the Oracle Arena in Oakland, California. The official time was 2:45.

Dawson (31-1, 17 KOs) was The Ring and WBC light heavyweight champion (titles not on the line). The rangy left hander from Connecticut had built a stellar resume, defeating the likes of Glen Johnson (UD 12, UD 12), Antonio Tarver (UD 12, UD 12) and Bernard Hopkins (MD 12).

Confident in his ability and pedigree, Dawson elected to drop down seven pounds to challenge Ward for glory in a second division.

It proved to be a shattering experience.

Now fully in the prime of his career, Ward was razor-sharp from the opening bell. The Oakland star, a harder hitter than given credit for, decked Dawson with a solid left hook in Round 3. Few had expected Ward’s power to register against the naturally bigger man. They were wrong.

It was more of the same in the fourth. Seconds into the round, a lead left hook put the challenger over again and Ward was now having a field day. Dawson rose gamely, only to be nailed by yet another fuselage of left hooks. He could not escape that punch – it was felt and not seen.

The punishment intensified down the stretch and Dawson was running on empty by Round 10. Not surprisingly, it was another left hook that opened the challenger’s parachute. Ward followed up with a strong two-fisted burst and an energy depleted Dawson crumpled to the canvas once more. He had nothing left and referee Steve Smoger called the fight off.