On this day: Mike Tyson’s mere presence takes Bruce Seldon out in one round 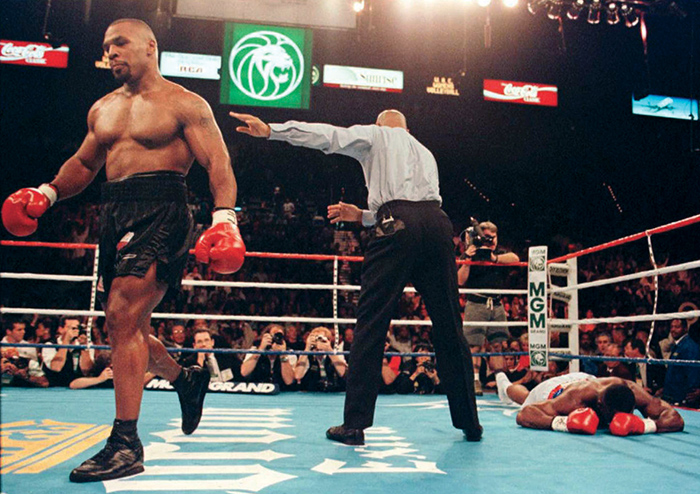 OK, OK, maybe there was one or two punches.

On Sept. 7, 1996, Mike Tyson gently succeeded Bruce Seldon as the WBA heavyweight titleholder via first-round stoppage at the MGM Grand in Las Vegas. The official time was 1:49.

Tyson was three fights into his comeback after spending three years in an Indiana state prison on a rape conviction. The former champ blasted out no-hoper Peter McNeeley (DQ 1); halted fringe-contender Buster Mathis (KO 3); and picked up the WBC title by scoring a repeat win over Frank Bruno (TKO 3).

Lennox Lewis was waiting in the wings as the WBC mandatory challenger, but promoter Don King paid the Brit an astonishing $4 million step aside fee so that Tyson could relieve Seldon of his WBA hardware first. Shortly after the Seldon win, Tyson would relinquish the WBC championship in order to face Evander Holyfield. Lewis and Oliver McCall later contested the vacant WBC title.

Seldon was – well – a tough sell. The Atlantic City native put losses to Tony Tubbs (UD 10), McCall (TKO 9) and Riddick Bowe (TKO 1) behind him to win the vacant WBA title at the expense of Tony Tucker (TKO 7). However, despite a 33-3 record, and a stoppage win over Joe Hipp in his maiden defense, The Ring had Seldon rated outside the Top 5 best heavyweights.

The Ring was right.

Tyson came out blazing with a massive right hand that just missed the target. Seldon retreated as fast as he could but had caught a sharp left hook while the sound of the bell for Round 1 still hung in the air. As Tyson rushed his prey, Seldon popped the jab and tried his best to punch with him.

Just as it was getting interesting, Tyson launched a right hand, which, at best, grazed the target. Seldon went down at mid-ring like he’d been poleaxed and seemed to ask himself a question or two before attempting to get up. He finally pulled himself erect, but his confidence appeared shattered. Tyson closed the gap and landed – by his standards – half a left hook that put Seldon on his face for a second knockdown. The overmatched fighter rose again only to stagger around in front of referee Richard Steele, who stopped the fight.

The crowd booed replays of the stoppage and both men picked up millions of dollars for very little. Tyson would move on to his first meeting with Holyfield. Seldon would be out of the ring for almost eight years before making an ill-advised comeback.

Just hours after the Tyson-Seldon bout concluded, iconic rapper and songwriter Tupac Shakur was gunned down in Las Vegas. Tyson has since shared that Shakur, who attended the fight, visited with him before leaving the MGM Grand that night.