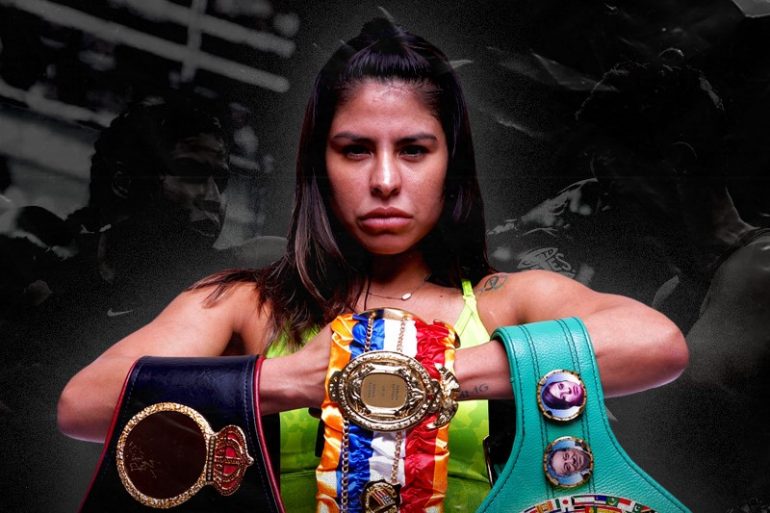 LOS ANGELES, CA (Sept. 7, 2022) – Flyweight World Champion Marlen Esparza (13-1, 1 KO), a Texas-born former Olympian, has re-signed a multi-year, multi-fight promotional deal with Golden Boy Promotions. Esparza was Golden Boy’s first ever female boxer signed to the company in 2016, and she launched her professional career under its banner in 2017 to ultimately become the WBC, WBA, and Ring Magazine Female Flyweight World Champion. Esparza sits at the top of the flyweight rankings and will be looking to break into other weight divisions.

“In the cutthroat business of boxing, ‘loyalty’ has proven itself to be rewarding. I am super excited with my newly structured deal,” said Marlen Esparza. “I’m with Golden Boy – who has been my day one – I’m doing what I love with great compensation and have opportunities to become undisputed as a flyweight and unify in other weight divisions. Thank you, Golden Boy!”

“Marlen Esparza has been a vanguard for female boxers and will continue to punch through glass ceilings as a woman in sports,” said Chairman and CEO Oscar De La Hoya. “We are extremely proud of how she has developed as a fighter. She has the work ethic, the vision and the hunger to become a unified world champion and crush other weight classes. Golden Boy is excited to have her and be a supportive partner as she continues her ambitious plans in boxing.”

A 33-year-old Houston, Texas native, Esparza is a decorated amateur who qualified to compete in the 2012 Olympics in London where she became the first American woman to qualify for the Olympics in the first year that women’s boxing debuted as an Olympic event. Esparza went on to win the bronze medal in the women’s flyweight division. Since turning pro in 2017, Esparza had a clean resume until she suffered her first and only loss in 2019 against Seniesa “Super Bad” Estrada for the vacant Interim WBA Flyweight Title on the Canelo vs. Kovalev undercard. However, that didn’t stop Esparza’s momentum as she came back stronger with back-to-back victories over former world title challenger Sulem Urbina and Shelly Barnett.

In 2021, Esparza had a successful year, with a unanimous decision victory against Ibeth Zamora Silva for the WBC Flyweight World Championship and successfully defended her new world championship title against former world champion Anabel “Avispa” Ortiz. On April 9, as part of the undercard of Ryan Garcia vs. Emmanuel Tagoe, Esparza faced her toughest challenge to date, taking on five-division world champion Naoko Fujioka. The fight pitted the #1 vs. #2 in the female flyweight division, granting them the honor of fighting for the first-ever, Ring Magazine Female Flyweight World Championship. After 10-rounds of nonstop action from two of the mightiest female fighters in the flyweight division, the judges ruled in favor of Esparza via unanimous decision, crowning her the new WBC, WBA, and Ring Magazine World Champion. Esparza was last seen successfully defending her three world titles against tough opponent Eva Guzman (19-2-1, 11 KOs) as the co-main event for Ortiz, Jr. vs. McKinson on Aug. 6.