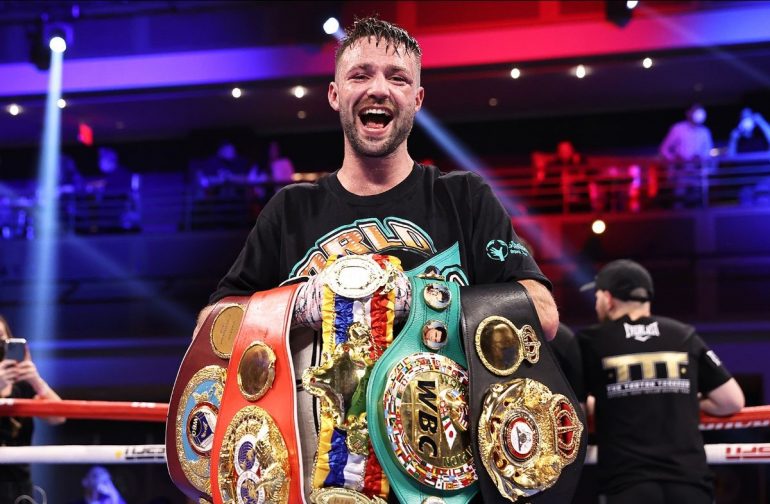 Could undisputed 140-pound champ be next for Crawford? Photo by Mikey Williams/ Top Rank via Getty Images
07
Sep
by Anson Wainwright

Next up is junior welterweight. As always, please enjoy the debate and respect other people’s opinions.

THE PAST: Taylor was a decorated amateur before turning professional in 2015. He claimed wins over former world titleholders Miguel Vazquez (KO 9) and Viktor Postol (UD 12) before entering the World Boxing Super Series. In a terrific run, the talented Scotsman beat the previously undefeated Ryan Martin (TKO 7); wrenched the IBF title from Ivan Baranchyk (UD 12) and unified against WBA beltholder Regis Prograis (MD 12). The latter victory saw the 31-year-old southpaw claim the Ring championship. “The Tartan Tornado” went on to become undisputed 140-pound champion by beating WBC and WBO titlist Jose Ramirez (UD 12). Taylor struggled with Jack Catterall before being awarded a highly controversial 12-round split decision.

THE FUTURE: Although he’s bursting at the seams at 140, he appears to be leaning toward a rematch with Catterall, which is mooted for November 26.

THE PAST: The southpaw boxer-puncher earned a reputation with some impressive performances on ShoBox against Amos Cowart (UD 8), Abel Ramos (RTD 8) and Joel Diaz Jr. (TKO 2). Built on those wins by stopping former unified 140-pound titleholder Julius Indongo (TKO 2) and dominating former lightweight titleholder Terry Flanagan (UD 12). Won the WBA title by taking apart the habitually tough Kiryl Relikh (TKO 6) in a career-best performance. Lost for the first time in an action-packed encounter with Taylor. The 33-year-old old has bounced back with three wins.

THE FUTURE: Tabbed to face Jose Zepeda for the vacant WBC title later this year.

THE PAST: The 2012 U.S Olympian moved steadily in the pro ranks before hitting world level. Ramirez won the vacant WBC title against Amir Imam (UD 12) and defended his title against Antonio Orozco (UD 12) and Jose Zepeda (MD 12) before unifying with WBO titlist Maurice Hooker (TKO 6). He then turned back the tricky challenge of Viktor Postol (MD 12). The 30-year-old lost his titles when he faced fellow unified champion Josh Taylor (UD 12) when they contested the undisputed championship. Has rebounded to beat former two-division beltholder Jose Pedraza (UD 12).

THE FUTURE: Pulled out of a fight with Zepeda for the vacant WBC title because he’s getting married. Will likely face the winner next year.

THE PAST: The Mexican-American sharpshooter suffered a dislocated left shoulder when he fought Flanagan (RTD 2) in a bout for the vacant WBO lightweight title. After recovering, Zepeda beat Ammeth Diaz (TKO 1), Miguel Zamudio (TKO 6) and the previously unbeaten Carlos Diaz Ramirez (KO 5) to earn a WBC 140-pound title shot against Ramirez. He gave a strong account of himself but dropped a close decision. Rebounded with five wins, including hard-fought win over former two-weight world titleholder Jose Pedraza (UD 12), an up off the canvas shootout with former 140-pound titleholder Ivan Baranchyk (KO 5) and a stirring stoppage over Josue Vargas (TKO 1).

THE FUTURE: Will face Prograis on a date and venue to be announced. 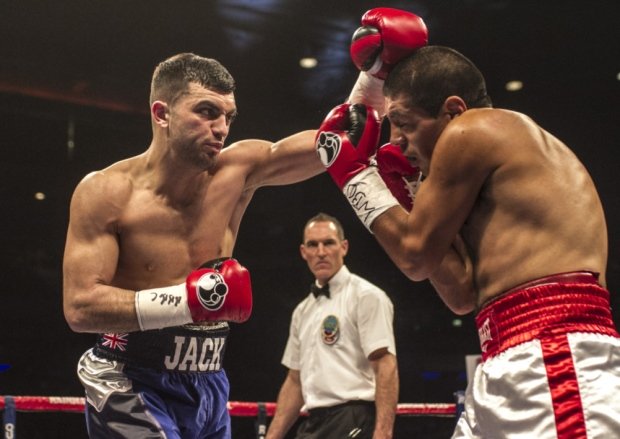 THE PAST: After turning professional learnt on the job and scored several impressive wins over the likes of Tom Stalker (TKO 8), Joe Hughes (UD 12) and won the British title against Tyrone Nurse (UD 12). However, despite staying unbeaten his career seemed to stall. He was the WBO No. 1 ranked contender and finally got his big chance when he met undisputed champion Josh Taylor earlier this year. Catterall fought the fight of his life, dropping Taylor before holding off the defending champions late charge. Most believed he had done enough but he lost a highly contentious 12-round split decision.

THE FUTURE: Signed with Boxxer in the U.K. to help make a rematch with Taylor a possibility, which is tentatively scheduled for November 26.

THE PAST: Heavy-handed Puerto Rican wrecking ball has stopped every opponent he has faced. Stopped unbeaten Maxim Dadashev in 11-rounds. Tragically the Russian passed away after the fight. That may have affected Matias, who was surprisingly listless against Petros Ananyan and lost a close 10-round unanimous decision. The 30-year-old has bounced back to take the unbeaten records of Malik Hawkins (RTD 6) and Batyrzhan Jukembayev (RTD 8). Earlier this year, he erazed the only blemish on his record when he stopped Ananyan (RTD 9).

THE FUTURE: Will face Jeremias Ponce for the vacant IBF title on the Deontay Wilder-Robert Helenius undercard on October 15

THE FUTURE: Has long gone back and forth with Teofimo Lopez on social media and was also at Lopez 140-pound debut. It would be no surprise to seem them meet in December.

THE PAST: The younger brother of former WBC featherweight titlist Gary Russell Jr. and bantamweight contender Gary Antonio Russell Jr. was a standout amateur and represented the U.S. at the 2016 Rio Olympics, reaching the quarter-finals. After transitioning to the professional ranks, Russell was impressive but 26-year-old southpaw’s activity initially held him back. This year has been a breakthrough for him and he has separated himself from the pack by stopping former world champions Viktor Postol (TKO 10) and Rances Barthelemy (TKO 6).

THE FUTURE: WBA titlist Alberto Puello and the winner of the vacant IBF title between Matias-Ponce have ties to PBC like Russell so a title shot in 2023 seems likely. 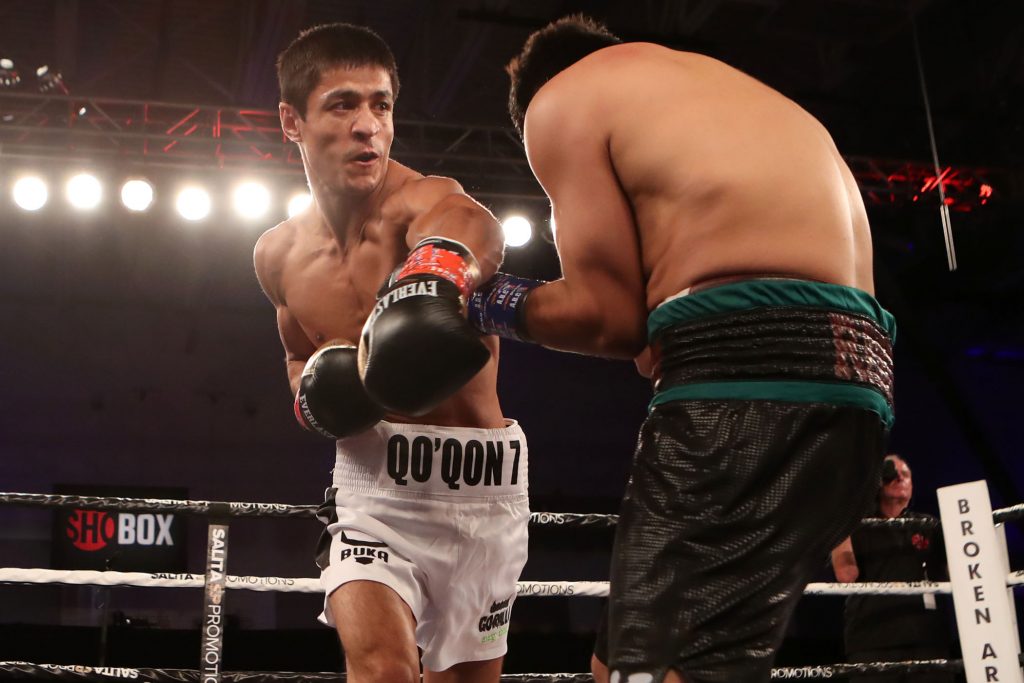 THE PAST: The big-punching Uzbekistan-born fighter won his first nine fights in Russia before moving to America. Since then, the 30-year-old southpaw has shown flashes of his potential taking the unbeaten records of Sonny Fredrickson (TKO 3) and Mykal Fox (UD 10). However, his team haven’t been able to lure any bigger names into facing the fighter.

THE FUTURE: A little under the radar but an excellent fighter, who will keep busy until a big opportunity comes his way.

THE PAST: The tricky Dominican southpaw fought at home until earlier this year. The 28-year-old holds wins over experienced campaigner Patrick Lopez (TKO 7), previously unbeaten Jonathan Alonso (UD 12) and big-punching Ve Shawn Owens (UD 10). When Taylor was forced to vacate the WBA title, Puello was matched with Batyr Akhmedov to fill the vacancy. Puello was able to use his skills and edge past Akhmedov (SD 12).

THE FUTURE: Likely to make the first defense of his title late this year/ early next year.

THE PAST: The Uzbek fighter represented Turkey at the 2016 Olympics, losing at the quarter-final stage. As a professional he moved quickly and stopped vastly more experienced Venezuelan Ismael Barroso (TKO 9). Lost his unbeaten record controversially against Mario Barrios (UD 12). Two wins later, he again found himself on the wrong end of a decision that could have gone his way when he lost to Puello (SD 12).

THE FUTURE: Will hope he can lure Puello into a rematch after narrowly losing the first time. May have to get back in the win column first though.