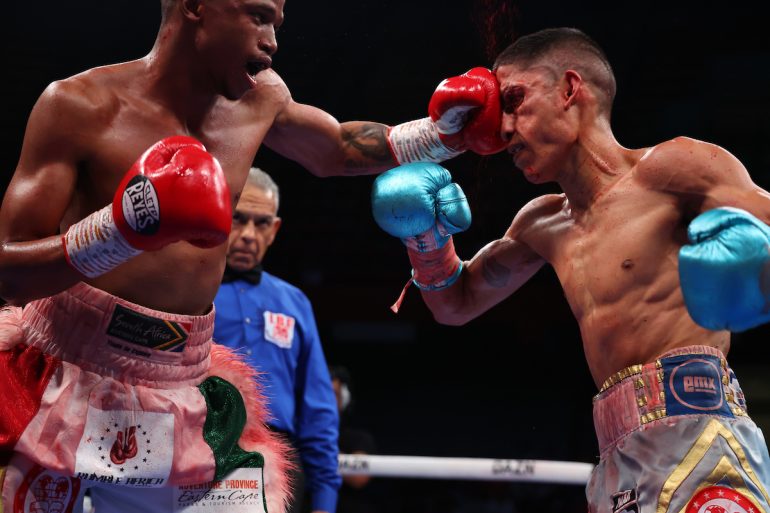 It proved a successful trip for the East London-born boxer, who fought the fight of his life, dropping Flores in the second round and edging home by close but well-deserved 12-round split decision.

Nontshinga, who moved up two places with the win and is now rated No. 5 by The Ring at 108-pounds, is rightly proud of his effort against his previously unbeaten foe.

“I’m feeling good,” Nontshinga (11-0, 9 knockouts) told The Ring on his way back to South Africa. “It means a lot to me because it’s a dream come true. It’s always been my dream to become a world champion.

“The fight was tough but I was ready. I was fit, mentally, physically and spiritually. I knew getting in the ring, I would get that strap. Hector Flores, is strong but the night just belonged to me.”

His trainer Colin Nathan expertly guided his fighter throughout the fight.

“It was a war of attrition and he really had to dig deep,” he said. “There is some viral stuff of me going around at the end of the ninth round when I said to Sivenathi, ‘We’re behind and you’ve got nine minutes to turn your life around.’ And that’s become quite a thing in South African boxing, everyone’s talking about that speech I gave him.

“I just felt he needed to win those last couple of rounds, particularly the championship rounds to get the decision and he did that. I’m just so proud of him and it was just such a great moment in the corner when he responded.”

Nontshinga’s trainer didn’t allow him to lose a split decision in Mexico!! He pushed his fighter across the finish line. Great corner work! #FloresNontshinga

Nathan is no stranger to winning on the road, having scored highly impressive wins overseas with the likes of former two-division champion Hekkie Budler, also in Mexico against Elwin Soto and previously in Japan, notably winning The Ring, IBF and WBA 108-pound titles against Ryoichi Taguchi and two-time flyweight titlist Moruti Mthalane, who scored a handful of wins in Asia.

“I like going into hostile territory and being booed and pulling off the upset,” said Nathan. “When the pressures on me and the odds are stacked against me, generally I produce with my athletes. I really like being in that environment. I just love going to Mexico and winning.

“Irrespective of whether I’m at home or on the road, I work very hard to get the win, like in Japan and other countries where I’ve pulled off some good wins. I just go in there with the mindset, this is what we have to do, even if we’re booed the fans can’t fight for the other athlete and we’ve just got to focus on what we need to do.”

The arduous battle was celebrated in a low-key manner though that may change when he arrives home.

“I just took a lot of pictures and then I just went straight to bed,” said the new champion. “It will change my life in a positive manner. Now I’m a world champion and can carry myself because I’ve gained in experience.”