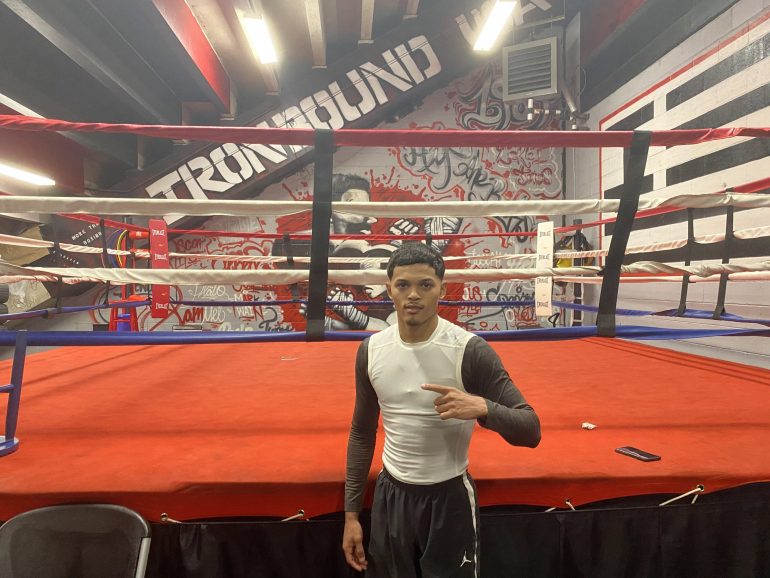 NEWARK, N.J. — No one can ever accuse Keith Colon of not being ambitious. The Newark-based amateur standout fought a boxer with 18 fights in his first bout when he was 12 years old, and then stepped up against a 22-fight veteran in his second outing.

Colon is also making the most of his time outside the ring as well, attending classes four days a week at Rutgers University as a Business and Digital Marketing student, with a projected graduation date in 2025. He graduated from the elite St. Benedict’s Preparatory School with Honors and earned a college scholarship, and now takes four classes per day while squeezing in multiple training sessions.

Balancing a life as an elite amateur boxer and college student puts his time management skills to the test, but the 20-year-old believes the two ambitions go hand-in-hand.

“You can’t just be a smart fighter in the ring, you’ve gotta be a smart fighter out of the ring. You’ve got to put yourself in certain positions out the ring to enhance your boxing career. It’s the same thing with you in the ring, you’ve gotta put yourself in perfect positions in the ring to enhance your outside self,” said the 90-bout veteran in an interview at the Ironbound Boxing Academy in Newark, where he trains with his father, Keith R. Colon, and Muhammad Abdul Salaam.

“It’s more credibility than if somebody sees me and I’m acting a fool. I’ll see my value appreciate after that.”

Colon has bigger ambitions lined up before graduation, with an eye on representing his family’s native Puerto Rico at the 2024 Olympics in Paris. To get there, he has to accrue points towards his international ranking, which is why he’ll travel to Pueblo, Colorado for the USA Boxing International Invitational, which takes place from September 12-15. Several countries will send boxers to the tournament, including the United States, the Philippines, China and France.

Colon, a 125-pound boxer, will be joined by 139-pounder Dennis Cabán as Puerto Rico’s two representatives at the tournament.

Colon, whose father’s family hails from Mayaguez, Puerto Rico, and mother’s family is from Villalba, Puerto Rico, says he hopes to bring home the gold from Colorado, before heading to Puerto Rico for another international tournament in December. Part of the enjoyment is also facing different styles each day, like tasting from a buffet of boxing approaches from around the world.

“You can’t see that here, the only way to see that is actually getting in the ring and actually fighting against it,” said Colon.

Colon has already seen a number of different styles in his amateur career, which has been highlighted by numerous titles in his home state of New Jersey, plus two gold medals at international tournaments and a runner-up finish at the 2021 USA National Championships.

“The main thing I got from him had nothing to do with boxing,” said Colon of Stevenson’s advice to him. “He told me, be yourself in and out of the ring. Don’t change for nobody. If you gotta change for people, then they’re not for you because you are who you are.”

If he couldn’t be a boxer, Colon figures he’d be an engineer or a businessman. If he could never throw another punch, he feels confident he’d still stand out in any room he walks into.

That’s why he puts in the work he does, in and out of the ring.

“I’m just filling in all the gaps. If boxing was taken away from me now, I would still be looked at as a responsible person, a gentleman,” said Colon.

“I’d still be that certain person that when I walked through the room, people would say, ‘That’s Keith Colon.’”