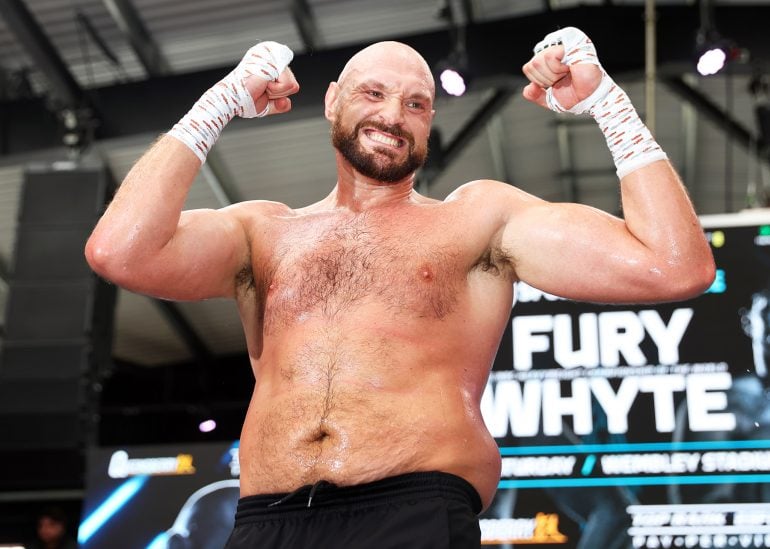 Tyson Fury flexes for the fans during the media workout for his Ring/WBC heavyweight title defense against Dillian Whyte in London. Photo by Mikey Williams/Top Rank Inc via Getty Images
05
Sep
by Joseph Santoliquito

“The Gypsy King” made it known that he plans on fighting again within the next few months, after “retiring” by relinquishing The Ring belt on his 34 birthday, Friday, August 12, to The Ring. Soon after, Fury decided to “unretire,” and now has apparently opened the door for Joshua.

“I think you’ve all heard that I’m going to be fighting soon within the next few months,” Fury said on Twitter. “I think that before I announce an opponent that I need to do this just in case.

“Anthony Joshua, I know you’ve just lost a fight to Usyk and you’re bout-less at the moment, and I’d like to give you an opportunity to fight me for the WBC heavyweight championship of the world and the lineal championship in the next few months.”

Fury noted that Joshua is coming off a title fight, so he’s “much fit, and you’re ready,” according to Fury, “and I’m giving you a few months’ notice. If you’re interested, I’ll send the date over and we can rumble for the WBC heavyweight championship of the world. Let me know if you’re interested.

“If not, I’ll select another opponent.”

Fury did show some interest in fighting Usyk, after he beat Joshua again last month.

On Tuesday, Fury offered Joshua 40-percent of the purse, saying Joshua, “doesn’t have any excuses now not to take it.”

If Joshua accepts, and some of the political wrangling that usually accompanies mega-clashes like that can be sorted out, it would probably be the biggest fight in British history.