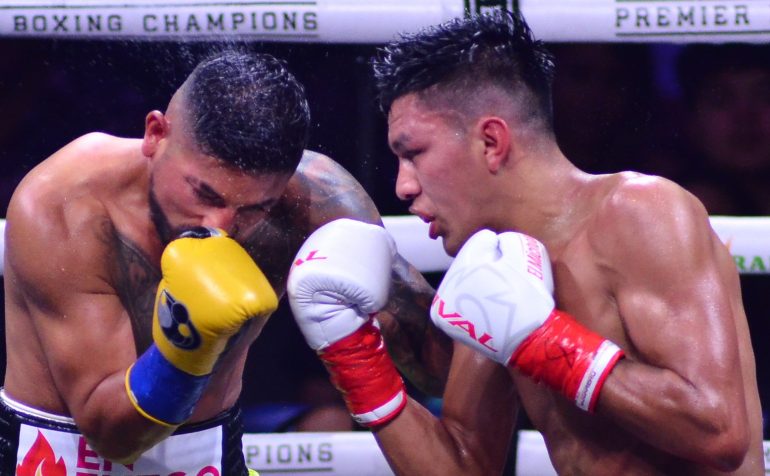 Mares (31-3-2, 15 knockouts), who is originally from Guadalajara, Mexico and now resides in the Los Angeles suburb of Montebello, was the aggressor and landed the more-effective punches during the first half of the fight.

During the second round, Mares landed a counter left hook to the head that shook Flores. Mares attempted to capitalize, but Flores wisely held to recuperate from the impact of the punch.

Both had their moments during the middle rounds as the ebb-and-flow produced decent exchanges. During this time, Flores began walking down Mares, initiating exchanges between the two fighters.

“Obviously it had been over four years, so I was a little off with my timing and a little sluggish,” said Mares after the fight. “But I felt good and I thought I was landing the more powerful shots.”

As the fight progressed, Mares slowed down. His punches did not have the same effect and Flores would walk him down, forcing Mares to fight off his back foot. Flores did his best work during the final three rounds, which he clearly won. After the final bell sounded to end the fight, both raised their arms and embraced each other.

Flores, who is originally from Morelia, Mexico and now resides in Houston, Texas, drops to 25-4-1, 12 KOs.

Mares was making his return to action Sunday after having not fought since his second fight against Leo Santa Cruz in June 2018. In January 2019, Mares had surgery to his right eye to repair a detached retina. The surgery postponed a planned fight against unbeaten Gervonta “Tank” Davis for later that year.

In an exclusive interview with Ring Magazine’s Joe Santoloquito, Mares claimed he returned to the ring for himself. He has provided color commentary for Showtime over the last couple of years.

Mares is far removed from his best days in the ring when he won world title belts in three different weight classes. It would be difficult for him to land a fight against a legit fighter at 135 pounds.

“I didn’t have any problems in there,” said Mares. “I felt good, I was just getting used to the timing again. After four years away I did enough to beat a young kid and an active fighter. My performance speaks for itself. The crowd was happy and it felt good to be home. I definitely felt like I won but it is what it is, the judges saw a draw.”