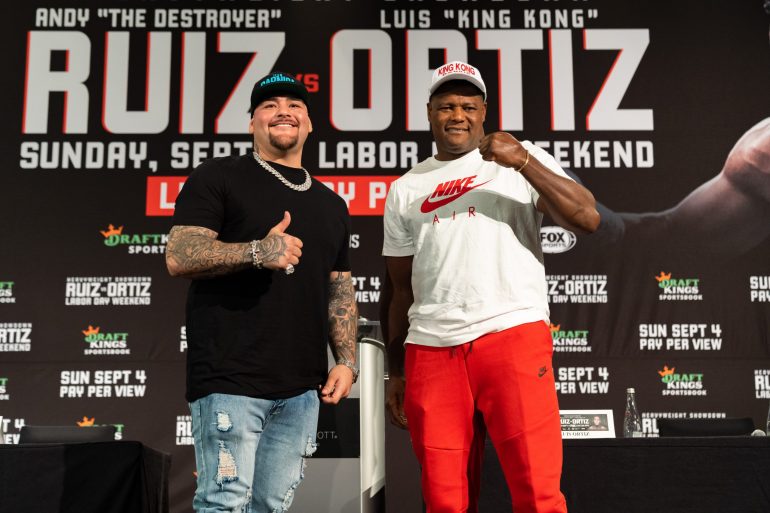 The Ruiz-Ortiz fight will headline a four-bout FOX Sports PBC Pay-Per-View telecast (9 p.m. ET/ 6 p.m. PT), and is a clash between heavyweights ranked in the top-10 by The Ring. Ruiz and Ortiz are ranked No. 5 and 6, respectively.

In his most recent bout on May 1 of last year, Ruiz (34-2, 22 knockouts), who resides in Imperial, California, defeated Chris Arreola by unanimous decision. In the Arreola fight, Ruiz weighed in at 255 pounds, almost 14 pounds less than Sunday’s clash against Oriz.

The 32-year-old reached the pinnacle of his career in June 2019, overcoming a knockdown to stop Anthony Joshua to win the unified IBF, WBA and WBO heavyweight titles. The reign was short-lived as he would lose to Joshua by unanimous decision in the rematch six months later, due in part by putting on 16.5 pounds from the first fight, partying and not training enough, resulting in a lackluster effort.

Ortiz (33-2, 28 KOs), who is originally from Camaguey, Cuba, and now resides in Miami, Florida, overcame two knockdowns to stop former IBF titleholder Charles Martin in the sixth round, last January. Martin was up on all three judges’ scorecards at the time of the stoppage.

The 43-year-old southpaw suffered the only two losses of his pro career at the hands of then-WBC titleholder Deontay Wilder.

Rounding out the rest of the pay-per-view telecast: