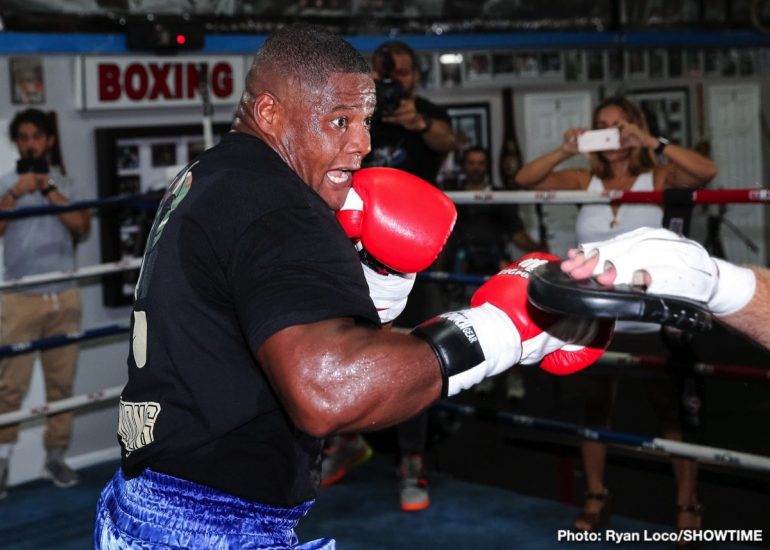 Luis Ortiz carries the intimidating nickname, “King Kong,” and there’s a lot behind that. The Cuban expatriate is a hulking 6-foot-4. He walks around at about 240 pounds and possesses menacing, debilitating power. Away from the ring—and training, Ortiz is the complete opposite. He can fill a room with his infectious, bellowing laugh and he’s a notorious practical joker. He’s also a hard worker whose intelligence sometimes gets overlooked.

The 43-year-old southpaw seems to be improving. He’s evolved from a fighter intoxicated with his own might to a more versatile boxer who’s able to beat opponents in multiple ways. In his last outing, Ortiz (33-2, 28 knockouts) was supposed to have problems with Charles Martin, and he did early on, getting knocked down in rounds one and four, before regrouping to stop Martin at 1:36 of the sixth round.

On Sunday, Ortiz faces another major challenge in enigmatic Andy “The Destroyer” Ruiz (34-2, 22 KOs) in a PBC event on FOX Sports pay-per-view (9PM ET/6PM PT) in a 12-round main event from the Crypto.com Arena in Los Angeles.

Ortiz seems like he’s arrested time, that nasty undefeated opponent called age. He laughed at the notion that he’s been lying about his age all this time and that he’s really 25.

“I feel really good, and I’m ready to fight, after the last five weeks of training camp,” Ortiz said through trainer German Caicedo. “I wish I was still 25. As far as concerns with Ruiz, I have none. I’m probably physically and mentally ready for any fight I’ve ever had. I’m not putting any emphasis on the knockout. If it comes, it comes. I believe what’s more important is to look convincingly good. I’m around 240, 241. The only thing that I’ve really done differently since the first (Deontay) Wilder fight has been bringing on (strength-and-conditioning coach) Jukka Toivola.

“That’s really been a difference. I’ve been eating healthy, a lot of hydration and I feel more energized.”

This has Fight of the Year possibilities.

We’re talking about two guys who like to go to war.

“I do think this could be a fight of the year, but does it turn into a brawl, we’ll have to wait and see,” Ortiz said. “I’m not going to shy away from any of that. Andy’s game plan has been set now for a few weeks. He says that he’s going to fight ‘smart.’ I don’t know what that means for an Andy Ruiz. It has the makings of a brawl.

“I’m going to do what I do best and that’s seek-and-destroy. That can come in many ways.”

Caicedo has seen Ortiz make great strides over the last two years. His only two losses came against then-WBC heavyweight titlist Wilder, the second time when Ortiz held a commanding lead on each scorecard when he was stopped at 2:51 of the seventh round. This version of Ortiz, Caicedo promises, could probably beat Wilder if they were to fight a third time.

“It’s been tough, because if (Tyson) Fury doesn’t retire and fights (Oleksandr) Usyk (the current Ring, IBF, WBA and WBO world champion), that’s going to push this thing back a while, considering a fight, followed by a rematch in there, and maybe a trilogy, followed by Wilder having a bid to get his turn,” Caicedo said. “Nobody has ever volunteered to fight Luis, except Wilder. I give a lot of credit to Deontay for doing that.

“This could be five years before Luis gets another title shot. It’s why we have to take advantage of every opportunity we have in the ring. And no one thinks Luis is an easy fight. Luis was never lazy. His ring IQ is very high. There isn’t a lot he hasn’t seen in over 300 amateur fights. Luis was a puncher for a long while, and he used to have the attitude that he could knock out anyone with one punch. He’s since learned otherwise. He relied too much on his punch. It took a lot of coaching to get Luis where he is.”

Ortiz knows Ruiz will try and crowd him. He’s coming off a long training camp of 10 weeks. It was like pulling teeth for that commitment for the two Wilder fights. He’s getting agitated at the right moment. King Kong is ready to explode.

“A lot of credit goes to Jukka and to Luis in being accepting to nutrition and trusting what we’re doing,” Caicedo said. “People are going to see Luis continue to look even better.”