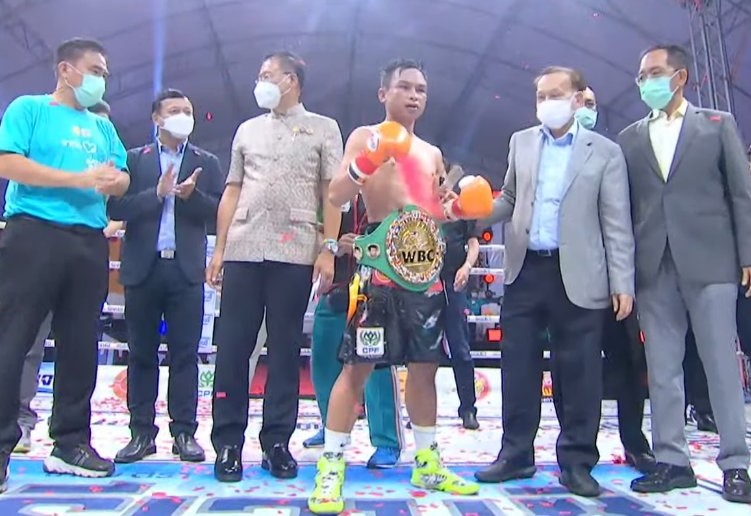 Petchmanee CP Freshmart (Panya Pradabrsi) defended his WBC strawweight title for the third time by scoring a hard-fought 12-round unanimous decision over the valiant Norihito Tanaka in Nakhon Ratchasima, Thailand, on Wednesday. The official scores were 119-109, 118-110 and 116-112.

Petchmanee, who is rated No. 1 by The Ring at 105 pounds, is unbeaten in five years and claimed the title when he defeated long-reigning titleholder Wanheng Menayothin (UD 12) in November 2020. He has since turned back the challenges of Danai Ngiabphukhiaw (UD 12) and Menayothin (UD 12).

Against this challenger, the defending champion looked to dictate the pace behind his jab. Tanaka, a former 105-pound Japanese national champion, was the aggressor and forced the fight throughout. By the third round, without much choice, Petchmanee elected to trade and both fighters enjoyed success in a fast-paced fight.

After four rounds the WBC’s open scoring revealed that Petchmanee was ahead 39-37 on all three cards.

The middle rounds were evenly contested with both men releasing strong combination attacks. In Round 7, Petchmanee thrilled his fans with a sustained barrage which was greeted by loud cheers. However, it didn’t impress the diminutive Tanaka, who was quickly back on the front foot.

Petchmanee’s greater accuracy and class was decisive. At the end of the 10th round, he backed Tanaka up with a right hand and followed with a combination that had the Japanese fighter covering up on the ropes.

To his immense credit, Tanaka fought hard and made his opponent work for victory in the championship rounds.

No Japanese fighter has ever won a world title fight in Thailand. The trend continues.