On this day: Vasiliy Lomachenko drops and outpoints game Luke Campbell in London 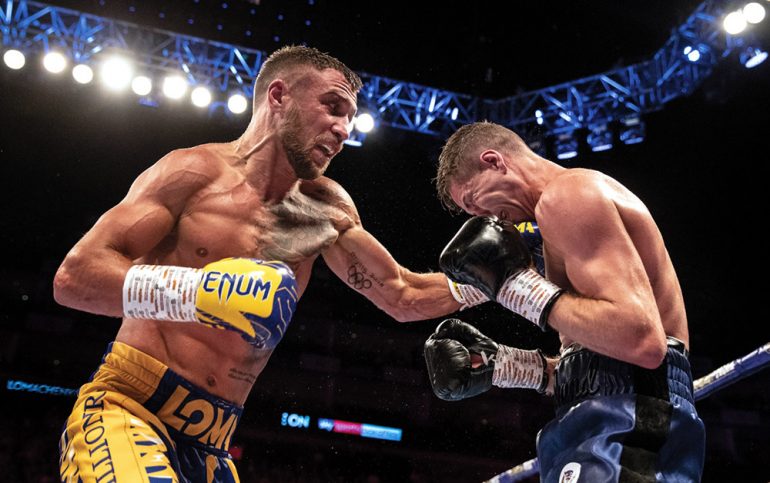 Hi-Tech in The Big Smoke.

At the time, Lomachenko was considered by many to be the finest fighter in the world, pound for pound. Blessed with elite-level skills, lightning speed and cat-like reflexes, the champion was a prohibitive favorite coming into his 14th world title bout.

Campbell, however, was a tricky proposition.

Like Lomachenko, the challenger was a former Olympic champion and a southpaw. Naturally bigger, Campbell carried significant height and reach advantages and he was very confident of springing the upset.  Already established on the world scene, the 31-year-old Englishman ironically put forth his best performance in a losing effort to then-champion Jorge Linares. Floored in the second round, Campbell got off the canvas and gave Linares all he could handle before losing a split decision.

Lomachenko, who stopped Linares is 11 rounds to win the lightweight championship, was a different proposition.

Campbell did very well to match Lomachenko’s feet and feint game in the early rounds. However, there was a noticeable switch in Round 4 when the Ukrainian wizard appeared to solve the style. Lomachenko upped the angles, worked his way inside and nailed Campbell with flush blows, many of which were aimed at the body.

It was a blow to the mid-section that hurt Campbell in the 11th and set up a knockdown. The home fighter rose gamely and hung tough to the final bell, but the result was never in doubt.