Born on this day: Angelo Dundee 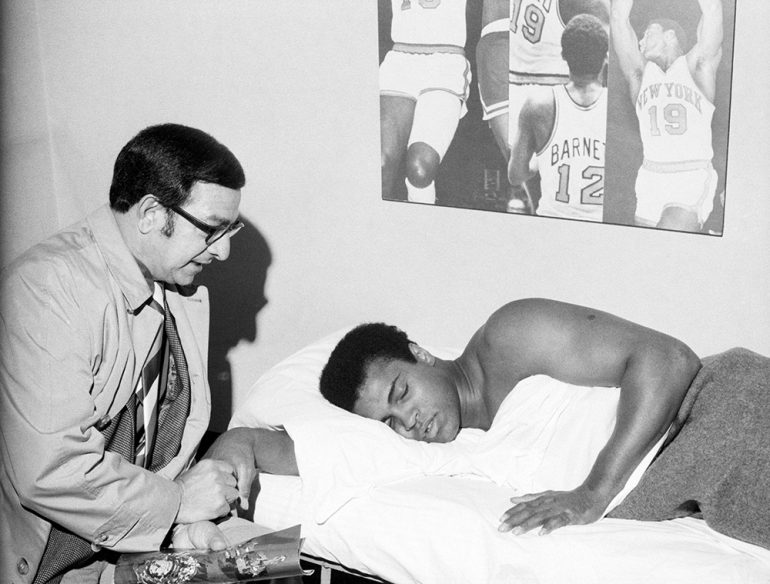 The weigh-in over, Ali, seen here with trainer Angelo Dundee, rested at The Garden until fight time.
30
Aug
by Diego Morilla

It takes a legend to train a legend. And in the case of Muhammad Ali, it took someone of his same stature in the game to rein him in and drive him to the highest heights.

Born Angelo Mirena on August 30, 1921 in Philadelphia to a couple of Italian immigrants from the region of Calabria, Angelo changed his name to Dundee in the early 1940’s (a common practice in boxing at the time) in honor of Johnny Dundee, an Italian-American two-division world champ in the early 20th century who had also “anglicized” his name to make it more palatable for the American public. His brothers Joe (fighter) and Chris (promoter) also changed their names.

He got his start in boxing during World War II while serving as an aircraft mechanic in the United States Air Force, working as a corner man in U.S.A.F. boxing tournaments and then settling in New York City where he made his apprenticeship as a bucket guy at the fabled Stillman’s Gym.

He then followed his brother Chris to Miami Beach, Florida, where they opened the equally fabled Fifth Street Gym and started working there with their own stable of fighters.

As a cornerman, had a long and illustrious career that stretched back to the darkest era in boxing, where the mafia controlled the game, and emerged with an impeccable reputation as a decent man even throughout the dark 1950s, when he served in the corner of fighters such as Carmen Basilio and Willie Pastrano.

He is better known, however, for his career-long relationship with Muhammad Ali. Dundee guided Ali since his early days and remained his chief second until the heartbreaking end. In those days he also became associated with another great fighter in Sugar Ray Leonard, guiding him through his best fights in the 1980s. And many years later in the mid ‘90s he famously led former Ali foe George Foreman to his second heavyweight title as well.

Along the way, he trained a number of great fighters in many divisions including 15 other world boxing champions such as Jose Napoles, George Scott, Jimmy Ellis, Luis Manuel Rodríguez, and more, always carrying on with his reputation as a respectful trainer who never imposed a new style on his fighters but rather worked with whatever talents they had and developed those to the fullest.

Dundee passed away in his sleep at the age of 90 on February 1, 2012, in Tampa, Florida. He had been inducted into the International Boxing Hall of Fame in 1992.