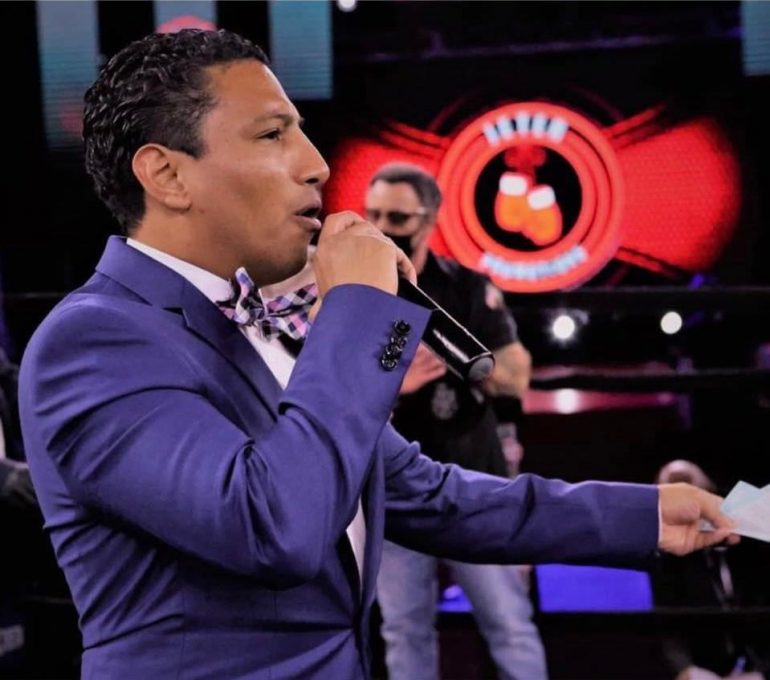 Barbosa working as a ring announcer
25
Aug
by Ryan Songalia

Alex Barbosa has done just about all there is to do in the sport of boxing. The 36-year-old from Philadelphia has been a pro fighter, a trainer, a gym owner, even a ring announcer. He’ll finally check off “pro boxing promoter” this Sunday when he hosts his first show on the Battleship New Jersey in Camden, N.J.

Barbosa, a Temple University graduate, compiled a 6-3-1 (1 knockout) record between 2011 and 2018, and has eight years of experience promoting amateur shows. Though he says getting in the ring had been the hardest thing he’d ever done, that all changed in the lead-up to fight week in Camden.

“I would say that promoting an event is harder than training for a fight. Even though training for a fight is more physically demanding, this is very mentally taxing,” said Barbosa, who adds that the birth of his son five months ago made him want to promote a show.

“It’s a very daunting task; there are a lot of intricate parts that people will never get to understand.”

Camden has a rich boxing history. The South Jersey city produced heavyweight champion Jersey Joe Walcott, who has a statue of his likeness on the Delaware River waterfront, and former two-division champion Dwight Muhammad Qawi.

In more recent times, featherweight prospect Raymond Ford, who trains out of Barbosa’s gym, TKO Fitness in Cherry Hill, N.J., has been the sport’s standard-bearer in town.

Still, pro boxing events have been virtually non-existent in the city after the heydays of the old fight clubs of the 1920s, 30s and 40s. Sunday’s show will be the first in Camden since 1999, which was the first show the town had seen in 11 years.

Barbosa says he can see the business of the sport evolving, and wants to be part of its evolution.

“I have a different understanding of the game because I’m not just a businessman, I’ve been in the ring,” said Barbosa.

“The game seems to be changing and I want to be a part of that. The pro fighter movement, fighters are starting to educate themselves a little bit more about the game and not just take such raw deals.”