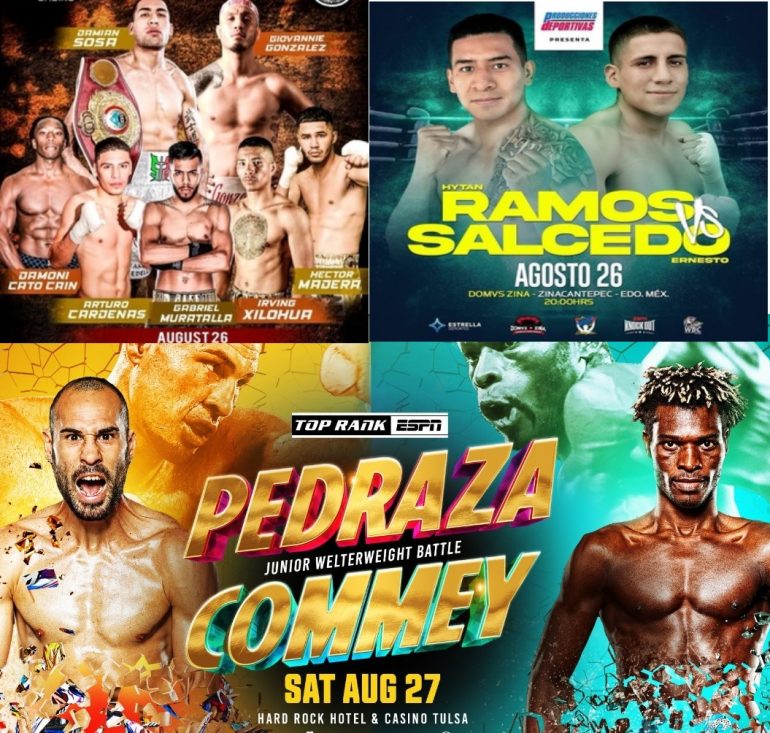 The unbeaten, 6-0 with 6 KOs Mercado is being fast-tracked into Berlanga territory. Watching him try to reach his 7th stoppage in as many pro outings should be a fun way to start the week.

Where to watch it: Fite

Not your possible first choice for a Friday night, but if you’re lucky enough to catch this card on EstrellaTV you should check it out.

“Samurai” Sosa is on a hot streak and will try to make some serious strides in this crossroads battle of once-beatens. Should be fun.

Where to watch it: FightHype/TVBoxeo

The always dangerous and entertaining Gassiev, a former cruiserweight champ, makes his move in the big boys’ division. And you know they will be giving their very best because the mighty Eurasian Boxing Parliament heavyweight belt is on the line. Yep. A worthy trinket indeed.

Where to watch it: Let’s google it together and hope to be pleasantly surprised

Another chapter of the already classic Japan-Philippines rivalry is set in motion here, with a regional title at stake.

The Top Rank card of the week gives us their usual intriguing main event between two solid fighters, and a stacked undercard with a ton of showcase bouts for their young, unbeaten stable of prospects. A must-see, as usual.

Sam Hyde vs. IAMTHMPSN – heavyweight – 3 round

You are reading this on a boxing website, and you’re wondering what’s going on. Boxing’s biggest platform being used to promote and broadcast a bunch of three-rounders between B-list celebrities and youtubers? Yep. That’s all you need to know. Move on, nothing to see here.

Where to watch it: DAZN PPV

Those of you lucky enough to grab this ESPN broadcast are in for a treat. The Argentina-Colombia rivalry will be renewed in the main event, Del Grecco will put his unbeaten record on the line against a solid test, and Cuban amateur legend La Cruz will try to add a new win to his ledger after his successful pro debut in Mexico.

Where to watch it: ESPN Knockout (South America)

Pradasbiri will be attempting to make the third defense of the title he took from his countryman and long-time reigning champion Wanheng Menayothin back in 2020.

Where to watch it: YouTube on the next day is the best bet here