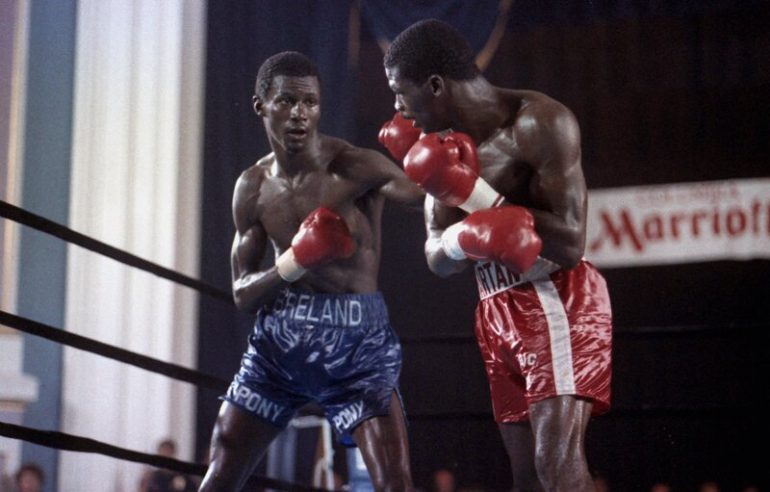 Finally, “The Magic Man” pulled a rabbit out of his hat.

On Aug. 22, 1987, Marlon Starling scored a dramatic come-from-behind 11th-round stoppage of the previously unbeaten Mark Breland to win the WBA welterweight title at the Township Auditorium in Columbia, South Carolina. The official time was 1:38.

Starling had been a professional since 1979 and had worked hard to reach the top. Defensively sound with terrific technique, the Connecticut-born slickster had the misfortune of running into a prime Donald Curry on two occasions. And while he’d been competitive in decision losses (SD 12, UD 15), subsequent setbacks to Pedro Vilella (MD 12) and Johnny Bumphus (TD 6) were bitter pills to swallow.

Breland was the antithesis of Starling. An Olympic gold medalist from the 1984 Los Angeles games – and still considered one of the finest amateur fighters ever – the skids were greased for the personable New York-based technician. Six months earlier, he’d won the WBA 147-pound title from Harold Volbrecht (TKO 7) and the sky was the limit. Starling replaced Rollin Williams for his maiden title defense.

While the 6-foot-2 Breland banked most of the rounds with his rangy boxing, he continually found himself on the canvas amid bizarre scenes. There weren’t any official knockdowns over the first 10 rounds, but the champion’s legs appeared to give out whenever things got rough at close quarters.

In the 11th round there was an official knockdown.

Starling started fast in the session and landed hard body blows. Breland, who had never been past the 10th, retreated and his return punches lacked snap. Suddenly, the challenger exploded with a furious combination at mid-range and Breland was in trouble. Starling went after him like a man possessed and, following a few more damaging shots, ended the fight with a ferocious left hook to the jaw. Referee Tony Perez completed the count a second or two before an unsteady Breland found his feet.

“I knew I was going to get him in the later rounds,” Starling told ABC sports afterwards. “I believe I was behind on all the scorecards, but he was breathing [hard] from the sixth round on.

“And once again, Marlon Starling fights the best undefeated fighters out there. And you know what? I’m the champ of the whole wide world.”