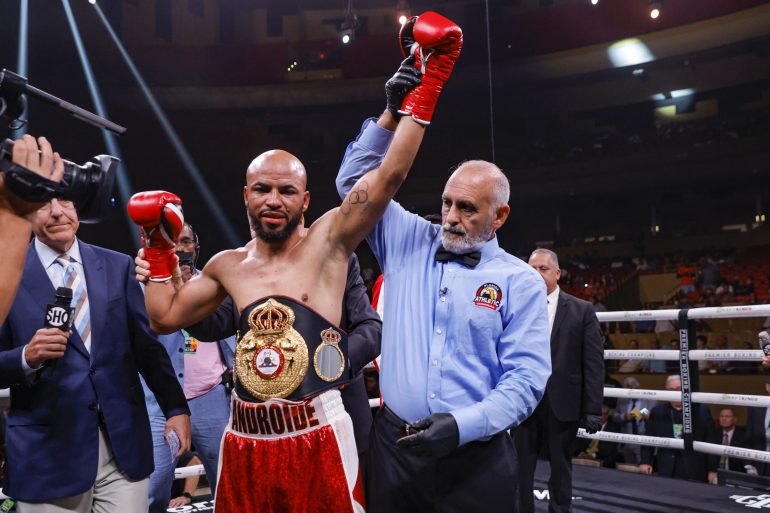 Last February, on two weeks’ notice, Hector Garcia was given a chance no one really thought he would succeed in. His family and friends may have been the only ones that thought he could beat then-unbeaten Chris Colbert. Garcia was considered someone decent who might be able to give the fighting rainbow Colbert some work.

The 30-year-old southpaw from the Dominican Republic gave Colbert a little more than anyone thought, pulling off one of the biggest upsets of 2022.

On Saturday night, on the Omar Figueroa-Sergey Lipinets Showtime undercard from the Seminole Hard Rock Hotel & Casino in Hollywood, Florida, Garcia claimed the WBA junior lightweight title with a unanimous decision over Roger Gutierrez, who was making his second title defense.

“It was fair for God to give me this opportunity,” Garcia said. “I worked really hard for it. A lot of sacrifices along the way. I’m thankful to PBC, Bob Santos, Luis DeCubas Jr., my team.

“It means a lot to me to win this title. I dedicate it to my people, the entire Dominican Republic and my town, San Juan de Maguana. In the pros, nobody knew me. But in the amateurs, people knew my name. I went to the Olympics – it was my dream. I had a good run.

“(Gutierrez) was looking for the right punch to take me down, but I was able to dominate, dictate the pace of the fight and get the win.”

Garcia used straight lefts, sneaky lefts, and a constant attack, while Gutierrez was idle for periods of time. By the eight round, Gutierrez’s head was crimson, bleeding from the left ear from Garcia’s rights.

Gutierrez tried pushing Garcia late, winning his first round in the 10th, but by then, the only way Gutierrez was going to beat Garcia was by knocking him out.

“I never felt like I was hurt badly during the fight, but it was a fair decision,” Gutierrez said. “I started too late in the fight. In the middle of the eighth round, I started to connect on my punches. He moved around my left hand. He’s not an easy fighter, for sure. 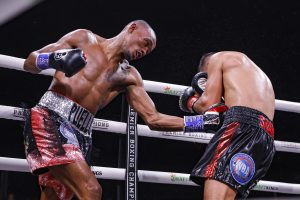 “It’s a bad moment for me right now, but it’s just one loss. I’m still young, only 25 years old. I’ll wait a little bit to know what I’ll do next, but I’ll rise again. For now, I want to rest and be with my family.”

Alberto Puello suddenly showed more excitement after he beat Batyr Akhmedov for the vacant WBA junior welterweight title than he did during the course of their fight.

Puello began giving the cut-throat sign to Akhmedov’s trainer, Joel Diaz, and proceeded to let everyone know why.

“I reacted to Akhmedov’s corner because Joel Diaz once told me I had no talent, and he didn’t let me join his team. I proved him wrong,” Puello explained. “I knew it was a close fight, and I just kept the distance and kept the pressure on the jab tonight and that helped me get the victory.

“All my conditioning in training is what helped me near the end of the fight. I executed what I did my entire training camp,” Puello said. “My preparation was the key to last the 12 rounds. I mixed it up, sometimes counterpunching and some other times coming forward.

“This win means a lot to me. This is a big thing for us Dominicans because my friend Hector Garcia and I are bringing two titles back home.”

Puello used accurate punching from the outside, while Akhmedov slammed the body. Puello ruled early, Akhmedov (9-2, 8 KOs) began coming on in the fourth, pinning Puello with body shots against the ropes.

Brandun Lee survives a scare against Will Madera

Junior welterweight Brandun Lee never tasted the canvas in his rising career, until Saturday night, when a bloody Will Madera planted him with a right to the jaw with :25 left in the third round.

“To be honest I thought some rounds were closer than the scorecards,” Lee said. “I think I went in there a little too careless (in the third). I told myself this guy has nothing to give me, but boy was I wrong.

“I lost focus and overlooked him for that split second. I was cautious in the first couple rounds, the first three until I got hit. I need to keep my left hand up and remain on my toes at all times.

“It was something I discussed with my corner going into the third round, to just slow down a bit. I’m not fighting tomato cans anymore. The dude was like No. 17 in the U.S. and has some experience. You can’t knock everyone out.

“It didn’t affect me for the rest of the fight. It took me about a round to recover. I had to change the game plan. I went from moving forward to boxing.

“Getting up from that shows that I have a lot of experience. A lot of fighters would have been done for the night or would have fought scared. I started boxing and I was still in the fight.”

As for his future, Lee “wants to keep on stepping up the competition. I’m at an age and record where there is no more looking back. I just heard that Josh Taylor vacated the IBF. So, I want the Subriel Matias-Jeremias Ponce winner.”