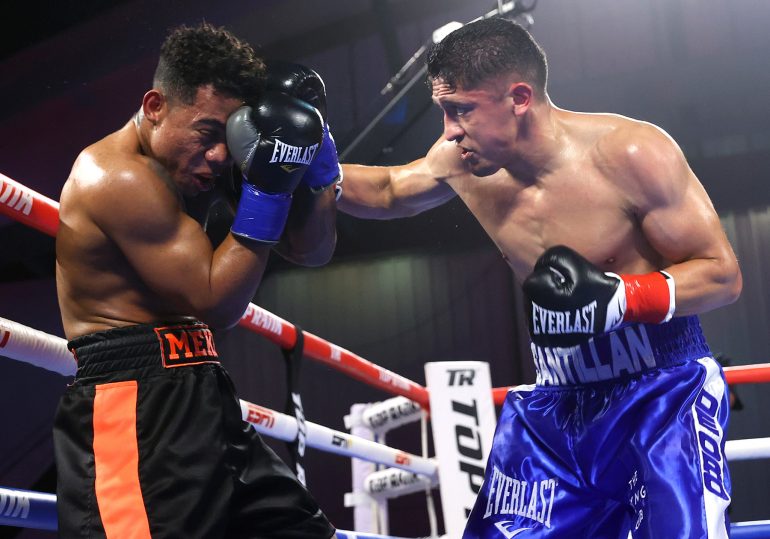 Vergil Ortiz and Jaron Ennis may garner a lot of attention, but another unbeaten welterweight contender believes he is capable of running the table in a very talent-rich division.

Santillan (29-0, 16 knockouts) has slowly emerged as a contender over the last several months. He signed a co-promotional deal with Top Rank early in 2020.

In his last bout on April 9, Santillan stopped Jeovanis Barraza in the seventh round. The win over Barraza took place less than six months after Santillan defeated Jesus Ruiz by unanimous decision.

The win over Ruiz also took place at Pechanga Arena in San Diego, marking the first time since August 2014 Santillan fought in his hometown. Santillan has fought throughout Southern California, allowing friends and family to travel to watch his fights in person, but he is grateful to be fighting on cards in his hometown.

“It’s exciting fighting in my hometown in San Diego,” Santillan told The Ring earlier this week. “A lot of people get to watch me fight in person. People reach out to me during fight week, which is great to see the amount of interest when I fight here. They’re seeing my dreams come true. When I signed with Top Rank, I wanted to fight on bigger shows on ESPN and I’m able to do that. Hopefully, I can fight in a main event in the future. I can only imagine more people would come out to see those shows.”

The 30-year-old, who is also promoted by Thompson Boxing, spent over 18 months out of the ring, beginning in April 2018, due to a managerial contract dispute. During that time, Santillan was out of the ring, but would help out at a local gym, training and working with novices.

That time period was difficult for Santillan, but he did not lose sight that he would return to the ring and contend in a crowded welterweight division.

“It was tough on me,” said Santillan, who made his pro debut in May 2012. “I didn’t know what was going to happen. I stayed busy by training in the gym. I would work and train with people everyday. I just stayed ready, but working with people, whether it was kids, adults, and other people was rewarding. Seeing and meeting people as passionate as me was a learning experience.”

Santillan has recently been working with trainer Robert Garcia, who will be working the corner of Anthony Joshua in the rematch against Oleksandr Usyk Saturday night.

Despite Garcia being in London over the last several weeks training Joshua, Santillan has had the opportunity to train with Garcia’s son, Robert, Jr., along with his father. He has been fortunate to receive quality sparring at Garcia’s gym in nearby Riverside, which has allowed him to improve his skill-set.

“I enjoy working with Robert,” said Santillan. “He identifies what you’re good at and to make you a better version of yourself. I’ve seen the improvements and I’m becoming a more-effective fighter. There’s a smarter way to fight, work the jab in, work on responsibly fighting defensively, and finding success.”

An impressive win could catapult Santillan more into becoming a legit contender. He is adamant in facing not only Ring Magazine champion Errol Spence or WBO titleholder Terence Crawford, but also Vergil Ortiz or Jaron ‘Boots’ Ennis.

Santillan believes he is one of the best fighters in the welterweight division and has the ability and skill-set to win a world title belt.

“I’m there now. I believe I’m a top-10 fighter. I have plenty of experience. It’s time for me to take these opportunities and make the most of them. I’m focused on this fight, but I’m ready to show the best version of myself against the best in the division. I believe I can beat anyone.

“Against (Luna), I’m going to go in there and hurt this fighter. If the knockout is there, then I’ll look to finish my opponent. Not only am I going to control every round, but I’m going to show what I’m made of. My opponent is not on my level.”

Luna Avila (19-0-2, 10 KOs), who resides in Gomez Palacio, Mexico, defeated Jafel Perales by decision over 10 one-sided rounds in his last bout on May 14.