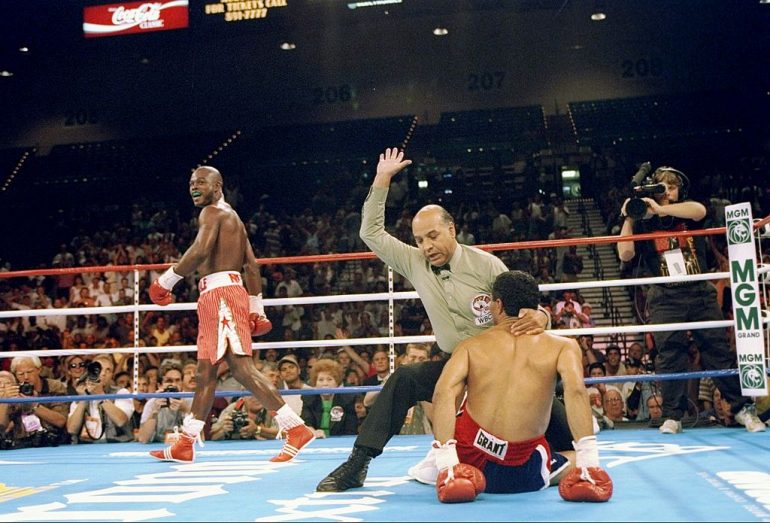 Norris finally closes the book on Santana. Photo by Holly Stein / Allsport
19
Aug
by The Ring

You remember this trilogy for all the wrong reasons.

On August 19, 1995, Terry Norris scored a crushing second-round stoppage of Luis Santana to regain the WBC junior middleweight title at the MGM Grand in Las Vegas. The official time was 2:09.

In their first fight, which took place in Mexico City in November 1994, Norris was disqualified in the fifth round for knocking Santana out with an illegal punch to the back of the head. Five months later, lightning struck twice, when Norris was thrown out for scoring a knockout blow after the bell to end the third.

This unlikely rivalry was a becoming a running joke in boxing. Norris was one of the finest pound-for-pound fighters in the world, whereas Santana was a journeyman and completely out of his depth.

The third fight would settle the argument.

A solid one-two decked Santana early in the second and he took a nine-count. Under normal circumstances, Norris would have pursued the finish with abandon. However, due to prior experience with this opponent, he was noticeably more cautious. Still, a sharp counter right dropped Santana again.

The end came shortly thereafter. Norris couldn’t miss and Santana went down for a third time following a barrage of lefts and rights. This time referee Joe Cortez waved the bout over without counting. Still smarting over the prior results, the new champ yelled at his beaten foe in derision.

“It should have been done a long time ago, but I kept making mistakes,” Norris told ABC Sports.

This fight was the chief support to Mike Tyson-Peter McNeeley.