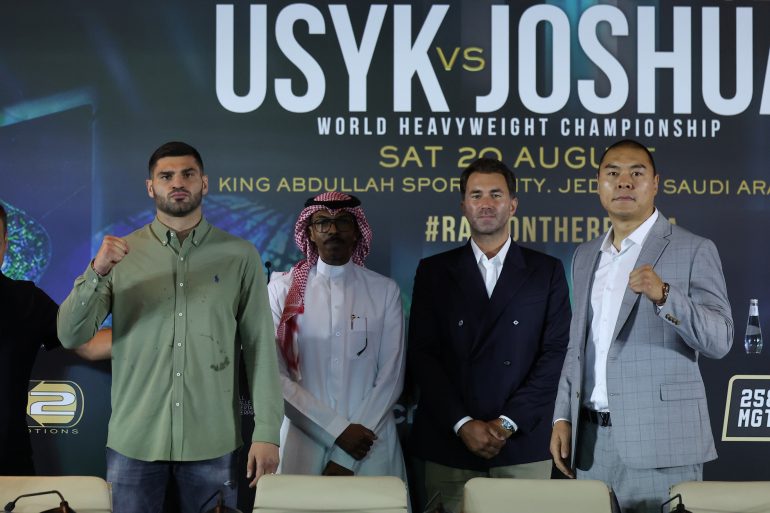 Oleksandr Usyk and Anthony Joshua face off again at the King Abdullah Sports City Arena in the coastal city of Jeddah, Kingdom of Saudi Arabia this Saturday August 20, shown live on Sky Sports Box Office in the UK and Ireland and on DAZN around the world in over 190 territories.

Here is a selection of quotes from the Rage on the Red Sea undercard press conference that took place at the Shangri-La Hotel in Jeddah today.

Filip Hrgovic:“It’s good to be part of this huge event. I’ve been waiting for this fight for almost two years. Like you said, we went through the whole list. A lot of fighters didn’t want to fight with me. I’m glad that we found the one that wants that. Thanks to Zhang and his team. I think that we will make a great fight. We are both big guys and we are both big punchers. I think he is a really dangerous guy but he lasts for a few rounds. I’m dangerous for the whole fight. I’m dangerous for 12 rounds. That is the difference. It’s a great moment for my career. I am co-main event and it’s an honour for me. Thanks for the opportunity and I’m sure you’re not going to regret it. We’ll make a great fight.”Zhilei Zhang:“First of all it’s an honour for me to be here in Saudi Arabia. I would like to say thank you to Mr Eddie Hearn, Matchroom and Saudi Arabia for making this happen. Being here is a privilege for me, of course this fight is important – it’s an IBF Eliminator. Winning this fight would mean I could directly step up to face the winner of Usyk vs. Joshua. It means a lot in China and for the sport of boxing in China. I will promote the sport of boxing in China for all of my people. For my last fight 16 million people in China tunes in to watch that. I believe we will make more history this time. I am expecting 100 million. I have 1.4 billion people behind me and supporting me. Let’s make it happen. I’m fighting for my country. On Saturday everybody is going to witness Chinese power again!” 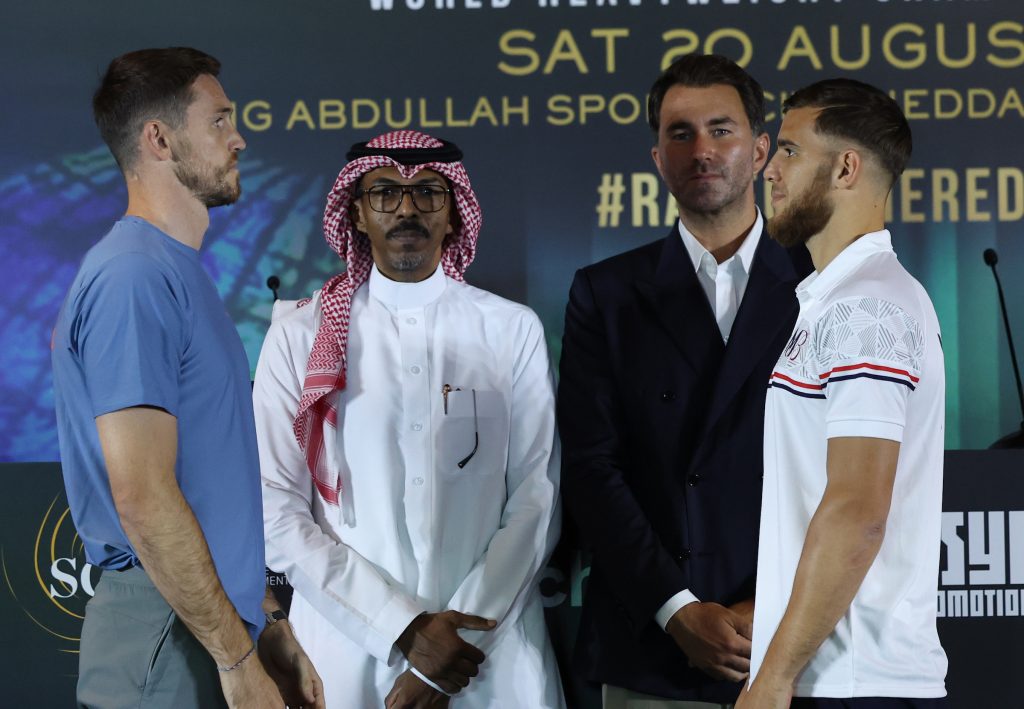 Callum Smith:“It’s must-win. I think every fight is must-win at this stage in your career. I’m in a busy division, a packed division where there’s a lot of fighters waiting for a shot at the World Title. A loss here puts me at the back of the queue – and it’s a very big queue to go to the back of. A win here puts me at the front of the queue, it puts me next in line to fight for the World Title. That’s the goal. I’ve been there before down at 168 and I believe I’m good enough to do it at 175. It’s a must-win and I’m excited, it’s a big show and a big platform to perform on. Hopefully I can get the business done and move onto a World Title. It’s been good to be here and good to get back here. Obviously I’ve got the best memories from being here, becoming a World Champion. There’s a good buzz around the place this time round. Obviously it’s a great main event but I’m here to do a job and that’s win. I left here last time as a World Champion. I believe I’ll leave here this time ready to fight for a new one.”Mathieu Bauderlique:“First of all I am sorry that I do not speak English, but I am honoured to be here to fight on such a prestigious card. I’ll be able to show all of my skills in front of a big stage. I am a warrior first and foremost. It’s in my DNA. I’m always here to win and I’m ready for a good fight.” 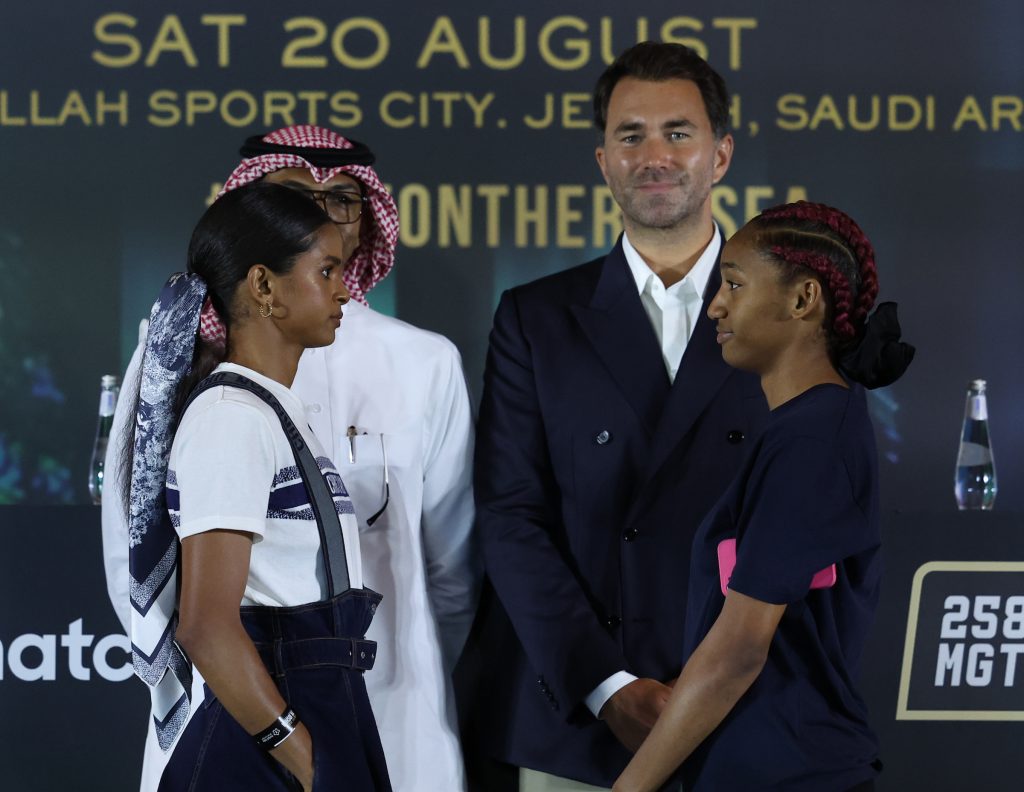 Ramla Ali:“I was saying to the journalists earlier that world records will be broken on the track or when you’re doing 100 metres. You might have that record at the time but then two months later someone else will beat it. But for me and my opponent Crystal we will be the first women in history to fight here and nobody can take that away from us. We will cement our names and it will be there forever. I know that along the way we’re going to be inspiring so many young girls and so many women to not only take up the sport of boxing but take up sport in general. I’m actually hosting a sister’s club here tomorrow. 30 to 40 girls have signed up to do the class. Knowing that we’ve inspired at least 30 women is a huge achievement in my eyes. I’d love to have one final fight at the end of the year, hopefully for a title. We’re working towards that. I’ve had an incredible camp. I’m so incredibly blessed to work with Manny Robles. I feel like his and my team’s experience has helped me become so ready for this fight. I’m 100% ready to put on a great performance.”Crystal Nova:“Thank you very much for giving me this opportunity to be one of the first female fights in Saudi Arabia. I look forward to giving me best in the ring.”Ben Whittaker:“Firstly, I want to thank God for putting me in this position. I want to thank 258 for knocking the door, we got here. I’m just treating this situation as an experience for me. I believe that I’ll be fighting for those belts one day and I just want to see what the fighters go through. That’s the magnitude of this fight and it’s great to be here. Looking at AJ, the nights he’s brought to Britain, it’s great for him and it’s great for the country. The Brits should get behind him because too many people always downplay what he’s done. I’m rooting for him, 258 are rooting for him and the rest of Britain should.”Badou Jack:“I want to thank Skill Challenge and Prince Khaled for having me, and the whole Kingdom of Saudi Arabia. I appreciate all of the love. I’m excited to finally fight here in Saudi. I’ve fought in Abu Dhabi and Dubai, but now finally we’re here so I’m excited. I’m here to stay. I feel young, I take care of my body. You’ve got to live a boxer’s life. You can’t just live it when you’re in training camp, it’s a lifestyle – all year round.”Andrew Tabiti:“I want to thank Prince Khaled from Skill Challenge Entertainment. I’m real thankful for having this opportunity. My original opponent was Tyrone Spong but that fight didn’t go through. I don’t know if I’m going to campaign at Heavyweight. I’m going to fight certain fights at Heavyweight, smaller Heavyweights. I might campaign at Cruiserweight and Bridgerweight. I definitely see AJ beating Usyk, he just needs to be smart and use his size and all of the advantages that he has. He can beat him.”Ziyad Al-Mayouf:“It was a huge honour and pleasure to be here yesterday. If I was writing my own story with my own hands, it wouldn’t have been as good as God is writing for me right now. I just love the support from the people. I love that I am a symbol of hope and opportunity, and I’m representing more than just boxing this Saturday. That’s a beautiful place to be for a young athlete. The good thing about pressure is pressure makes diamonds! That’s what’s going to happen on Saturday. I’m here to inspire. I want to be a steppingstone to the athletes of Saudi Arabia and the Arab world that are going to come after me.”Daniel Lapin:“I have the main advantage which is my height. That’s why I will keep my opponent at distance. I will not give him the opportunity to come closer. I have done all of the preparation with Oleksandr Usyk’s team and I think that he is in the best form that he has ever had.”

Eddie Hearn, Matchroom Sport Chairman:“A historic occasion this Saturday in Jeddah. Nothing bigger in the world of boxing than the World Heavyweight Championship. Before we get to the main event press conference there’s so much to discuss with the members of the undercard ahead of a huge night. We want to thank our friends at Skill Challenge Entertainment, they’ve been incredible partners and the investment that they’ve made in not just bringing the elite end of the sport to the Kingdom of Saudi Arabia, but the investment that has been made in the participation level, the grass roots level and the development of young talent here as well. Participation levels up by over 300% here in Saudi Arabia. There’s amateur tournaments going on right now as we speak and throughout the week, motivated and inspired by some of the biggest names in the sport in Oleksandr Usyk and Anthony Joshua.”
A press release by Matchroom was used in this article.