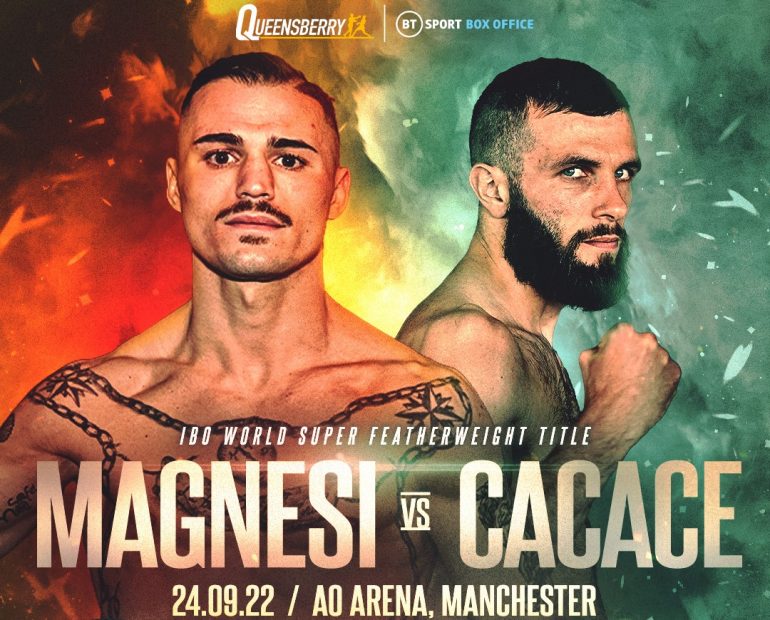 Anthony Cacace, Ekow Essuman, Nathan Heaney, Raven Chapman and Mark Heffron will all appear in the supporting cast of the September 24 Joyce-Parker ‘Nowhere to Run’ card at the AO Arena, Manchester.

In the main event, heavyweights Joe Joyce and Joseph Parker will be fighting for the right to take on the winner of the rematch between Oleksandr Usyk and Anthony Joshua.

Nottingham’s British Commonwealth welterweight champion Essuman (17-0, 7) will be making a third defense of his belts against former English champion Samuel Antwi (14-1, 6) from Stockwell in London.

Essuman, 33, last defended in April at Wembley Stadium with a points verdict over Darren Tetley, having won his British and Commonwealth titles by defeating Chris Jenkins via stoppage in July of last year. Antwi won the vacant English title against Tetley in February 2021 and made a successful defense in February of this year with a unanimous decision win over Conah Walker.

Heaney, 33, who is striving towards a major title challenge at the home of his beloved Stoke City, recently scored a seventh-round stoppage of the experienced Sladan Janjanin in November 2021 and returned to action in April in Telford and survived a first-round scare to ultimately overcome the dangerous Diego Ramirez by a significant margin over 10 rounds.

Former English champion Flatley, known as ‘Quiet Storm’, will come into the fight off two straight victories following his EBU title defeat to Kerman Lejarraga in December of last year. Flatley has a draw on his record against the current British super welterweight champion Troy Williamson.

The Queen of Queensberry, Raven Chapman (3-0, 2), moves quickly into title business with a challenge against Argentina’s Jorgelina Guanini (10-4-2, 1).

The 28-year-old Chapman, known as ‘The Omen’, made her Queensberry debut in May in explosive fashion when she stopped Gabriella Mezei in less than a minute.

She will be stepping up in levels against Guanini, a former IBF world champion at super flyweight, who recently defeated then-unbeaten Brit Stevi Levy in Barcelona. The 30-year-old has previously lost on points to British opposition in Rachel Ball and Ellie Scotney.

The new British super middleweight champion Mark Heffron (28-2-1, 22) from Oldham will also feature on the card in an eight-round contest.

Liverpudlian James Heneghan (7-0) is back out in a six-rounder, while the card is finished off with up-and-coming Queensberry fighters Amaar Akbar (3-0) and Tommy Fletcher (1-0) both in four-round action.

“It is certainly going to be an all-action on BT Sport Box Office in the lead-up to the big heavyweight showdown at the top of the bill in Manchester,” said promoter Frank Warren. “I am thrilled to deliver a major fight for Anthony Cacace after his obvious disappointment over missing out at Wembley Stadium in April and winning this title against an unbeaten champion will put him in such a strong position in the super featherweight division.

“Ekow Essuman will be able to call the British title belt his own if he overcomes a strong challenger from Samuel Antwi in what is his mandatory defense of the belt. The impressive Ekow will quickly be able to move on to European and world honors if he can do the business at the AO Arena.

“It will be exciting to see Nathan Heaney in a good domestic scrap against the tough and very capable Jack Flatley. Nathan has developed and improved enormously in three tricky assignments against overseas opposition, and I am sure his army of fans will be looking forward to this one.

“Our current First Lady, Raven Chapman, really looked the part on her Queensberry debut in May when her opponent was blitzed in just 58 seconds. It showed us that Raven is ready for a step up and former world champion Jorgelina Guanini will provide a stern test of her credentials, with a WBC title on the line.

“Mark Heffron, fresh from his brutal stoppage of Lennox Clarke in July, is fully deserving of a fight closer to home and it will be good to see him really building some momentum as he heads into significant title action later this year.

“Add these four title fights to the four belts being on the line between Amanda Serrano and Sarah Mahfoud, plus the high-stakes heavyweight collision between Joe Joyce and Joseph Parker at the top of the bill and we should be in for a thrilling night of top-class action on September 24 that is not to be missed.”

Joyce vs Parker is promoted by Frank Warren for Queensberry Promotions in association with BOXXER.

A press release by Queensberry Promotions was used in this article