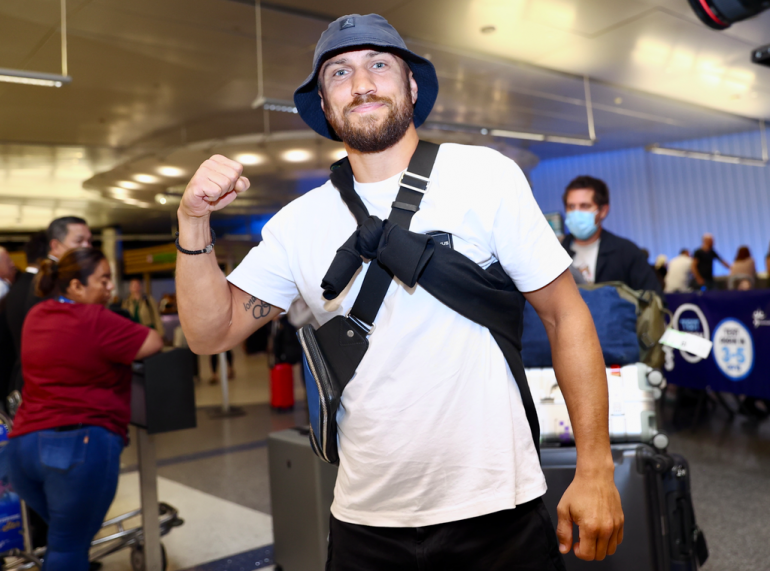 Vasiliy Lomachenko will return to the ring on October 22 against unbeaten lightweight Jamaine Ortiz, promoter Top Rank confirmed to The Ring.

The bout, which was first reported by Mike Coppinger, is likely to take place in Las Vegas, though a venue has not yet been secured.

Lomachenko (16-2, 11 KOs) of Bilhorod-Dnistrovskyi, Ukraine is looking to earn his third straight win after losing his unified lightweight titles last year to Teofimo Lopez. The 34-year-old was last in the ring in December, outclassing Richard Commey to a decision win.

Ortiz (16-0-1, 8 KOs) of Worcester, Mass. is coming off a career-best win, sending former WBO junior lightweight titleholder Jamel Herring into retirement with a unanimous decision win in May.

The former pound for pound champion Lomachenko arrived in Los Angeles Tuesday night to begin training camp, while still having a piece of his heart back in his native Ukraine, which has been at war with Russia since February.

Lomachenko also wants his shot at the undisputed lightweight championship, which is currently held by Devin Haney. Lomachenko had been on the short list of potential opponents to face George Kambosos Jr. in his first defense after the Australian boxer outpointed Lopez, but Lomachenko had to withdraw consideration due to the war in Ukraine, where he was volunteering in a defense battalion against the invading forces.

“I’ve prepared for this moment, and I need this chance. I need this fight… undisputed. Undisputed world champion,” said Lomachenko.