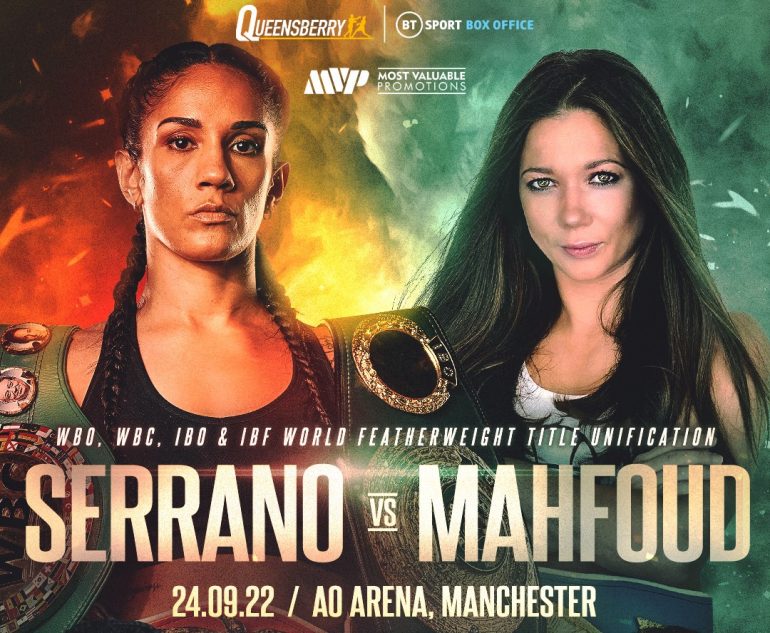 Even after being a top-three pound-for-pound talent and a multiple divisional titleholder, Amanda Serrano remains one of the few women’s boxing superstars that never had a Ring title belt strapped around her waist.

This situation could change very soon.

Following the announcement of the title unification bout between Serrano and Sarah Mahfoud at the AO Arena, Manchester on September 24, The Ring’s Women’s Ratings Panel was asked to vote on whether to allow the fight to have the fabled Ring championship belt at stake.

The vote was unanimously positive, and the winner of that fight will now officially be crowned as the first-ever Ring featherweight champion of the world.
Puerto Rico’s Serrano is rated No. 3 at pound-for-pound, and has been rated at No. 1 in the featherweight division for over a year. During that year, Mexico’s Erika Cruz-Hernandez rose to No. 2 after winning the WBA belt from Canada’s Jelena Mrdjenovich back in early 2021, defending it once. Since then, several (ultimately failed) efforts were made to have Serrano and Cruz come to terms for a unification bout with all the marbles at play – including the Ring belt.

Enter Denmark’s Mahfoud, the unbeaten current IBF titleholder who owns a win over Brenda Carabajal (who was scheduled to face Serrano last month in the cancelled Jake Paul-Hasim Rahman Jr. undercard), who had no problem jumping in on short notice to take on one of the world’s most avoided opponents in a fight for pride and glory to be disputed in a venue located abroad for both combatants.

If that’s not Ring-worthy, then it will have to do until the real thing comes along.

Serrano, 33, is coming off a narrow split-decision loss to pound-for-pound queen Katie Taylor in a lightweight championship bout at Madison Square Garden back in April 2022, in what was the first women’s fight in history to headline at that venue. In front of a sold-out crowd of 19,187, Serrano nearly finished Taylor off with a barrage of punches in the fifth round, before ultimately dropping a split decision.

Mahfoud, 32, last defended her IBF belt back in April by defeating Nina Meinke over 10 rounds in Copenhagen.