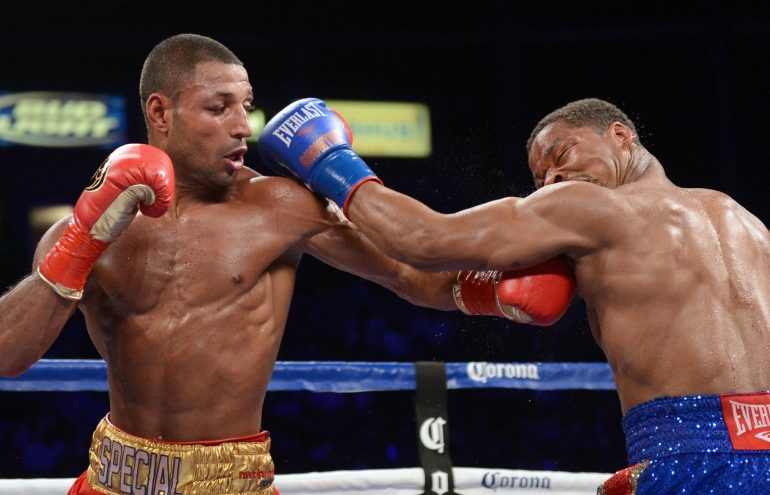 Photo by Naoki Fukuda
16
Aug
by The Ring

It was the night of Special K’s life.

It took a very long time for Brook to reach the summit of the sport. The then-unbeaten boxer-puncher from Sheffield was supposed to face Devon Alexander for the IBF title on three separate occasions, but injuries – twice to Brook and once to Alexander – led to that matchup falling apart.

Shortly thereafter, Alexander was matched against the undefeated Porter. It was a competitive fight at the Barclays Center in Brooklyn, but Porter emerged victorious via 12-round unanimous decision. “Showtime” made one defense – a devastating fourth-round stoppage of Paulie Malignaggi – before targeting Brook, his mandatory challenger.

Brook is naturally bigger man than both Alexander and Malignaggi, so he could match the rampaging Porter for strength. Furthermore, his technical craft and superior timing allowed him to control large parts of the fight. Both men suffered cuts from head clashes and it was a grueling two-way battle, but Brook deserved the win.

“It was torture [waiting on the decision] because I was away from home and I wanted that title so bad,” Brook told The Ring two days on from his greatest triumph. “When the announcer said ‘and the new’ it was an incredible feeling and my legs just went from under me.

“I had to make subtle adjustments [in the fight]. Porter was well out of range on the outside, but he would leap in suddenly and try to smother me. He was rough up close, but I was smart and boxed well on the outside. I had him on the end of the jab and the right hand. My defense also had to be spot on because Porter was being hailed as this welterweight Mike Tyson.”