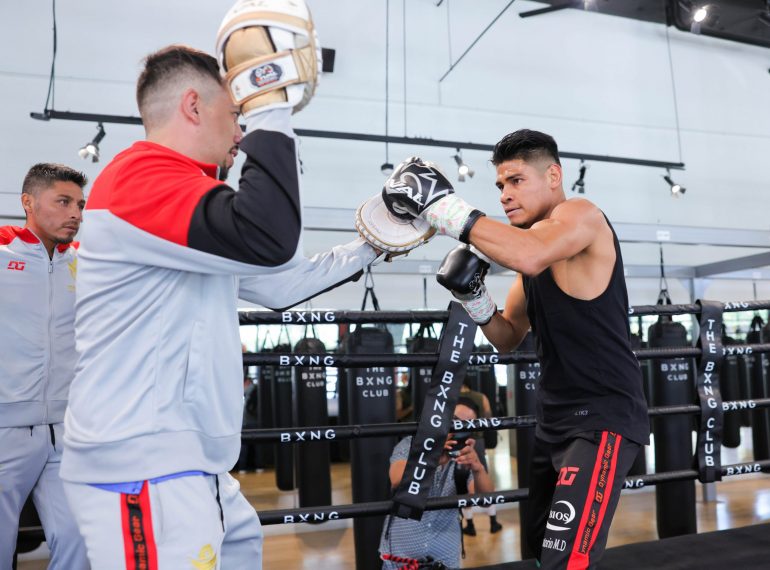 Teak-tough Mexican punching-machine Emanuel Navarrete puts his WBO featherweight title on the line for the third time when he meets Eduardo Baez at the Pechanga Arena in San Diego, on Saturday.

Navarrete, who is rated No. 1 by The Ring at 126 pounds, enjoyed some rare down time having had nine world title fights in three-and-a-half-year period. However, he is looking forward to returning after a 10-month hiatus.

“I’m very happy for my big return to the ring after some time off,” Navarrete (35-1, 29 knockouts) told The Ring through Memo Brito. “I’ve been working a lot on my physique, enjoying my family, dealing with some personal business in my town. We had some stuff to deal with the promoting company, we were working on, but it all went good. I am officially back as a Top Rank boxer for this next fight on August 20, and I am very happy.”

The 27-year-old, who claimed the vacant WBO title by beating Ruben Villa (UD 12) in October 2020, has notched defenses against Christopher Diaz (TKO 12) and Joet Gonzalez (UD 12), and he is relishing the prospect of facing his largely unknown countryman.

“I’m happy to fight Baez,” he said. “I haven’t really seen much of him; I don’t know that much of him or his style but we know he is tough. We will be working to put on a great show.”

Navarrete, who is training in Tijuana under the watchful eye of his uncle, Pedro, cousin Pedro Jr. and Juan Lugo, hopes this fight will lead to something bigger.

“I would like to unify with anyone of the other 126-pounds champions,” he said. “After that, going up to 130-pounds, where I could face Oscar Valdez. That would be a fight I’d love very much.”

Baez turned professional in 2013. The 27-year-old, who originally hails from Mexicali, has lost just twice in 25 outings. He came up short against now world rated Mauricio Lara (UD 6) and Ra’eese Aleem (MD 10). He does hold wins over previously unbeaten Narek Abgaryan (UD 8) and Abimael Ortiz (UD 8). Most recently, he edged past Jose Enrique Vivas (MD 10). Baez has a record of 21-2-2, 7 KOs.