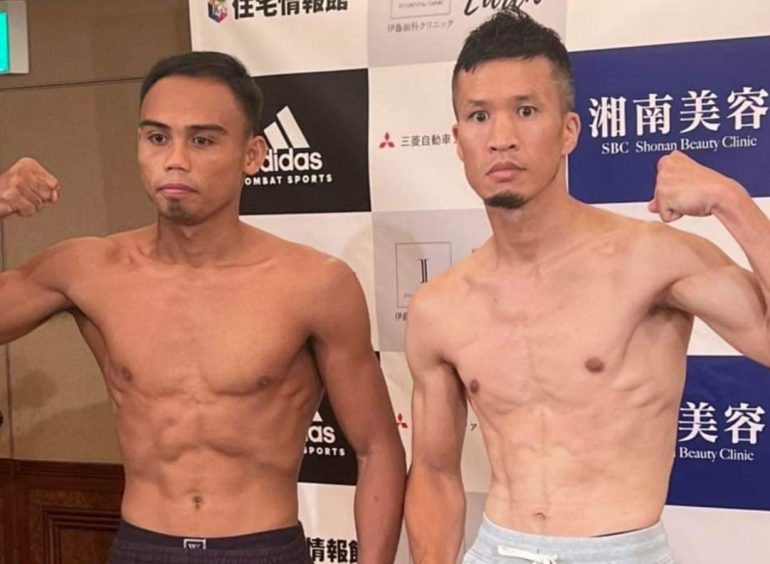 Jeo Santisima kept his prospects for a second world title shot alive on Sunday, knocking out former title challenger Hiroshige Osawa in round five of an eight round featherweight bout at EDION Arena in Osaka, Japan.

Santisima (22-4, 19 knockouts) of Masbate City, Philippines repeatedly took advantage of Osawa’s lowered right hand, catching him multiple times with counter left hooks. Those hooks produced a knockdown in round 3, and one more in the fifth, which compelled the referee to stop the fight without a count.

“I fought on enemy’s turf and it was not wise to let the judges decide the fight. The game plan was really to finish the fight within the distance,” said Santisima, 26.

The win was a much-needed bounce back for Santisima, who had been stopped in nine rounds by Joet Gonzalez in his previous fight in March. It was also Santisima’s first win abroad, after suffering stoppage losses to Gonzalez and WBO junior featherweight titleholder Emanuel Navarrete in 2020.

“It was a make or break fight. He couldn’t afford to lose but we knew he would beat Osawa,” said Santisima’s promoter Jim Claude Manangquil of Sanman Promotions. Santisima is trained by former Filipino boxer Michael Domingo at Villamor Boxing Gym in Cebu.

“We are looking for bigger fights next,” added Manangquil.

Osawa (37-6-4, 21 KOs) had won four straight bouts, and was hoping to build momentum back to a world title fight after losing by seventh round stoppage to Oscar Valdez in a 2016 challenge for the WBO featherweight title.

In other action, former WBA strawweight titleholder Ryo Miyazaki (26-3-3, 16 KOs) was stopped in round one by Panamanian visitor Azael Villar (19-1-3, 15 KOs) in an eight round flyweight bout. Miyazaki, 33, has struggled since moving up in weight following his exciting 105-pound title run, losing by knockout to Teeraphong Utaida and being outpointed by Ryoichi Taguchi in a 2016 challenge for the WBA junior flyweight title.

Junior lightweight boxer Masahori Rikiishi (12-1, 7 KOs) of Nagoya, Japan took another step forward in his career, stopping Filipino KO puncher Tomjune Mangubat (15-4-1, 12 KOs) in the fourth round of their 12-round bout. The win is the tenth straight for the 28-year-old southpaw, while Mangubat falls to his second straight loss.