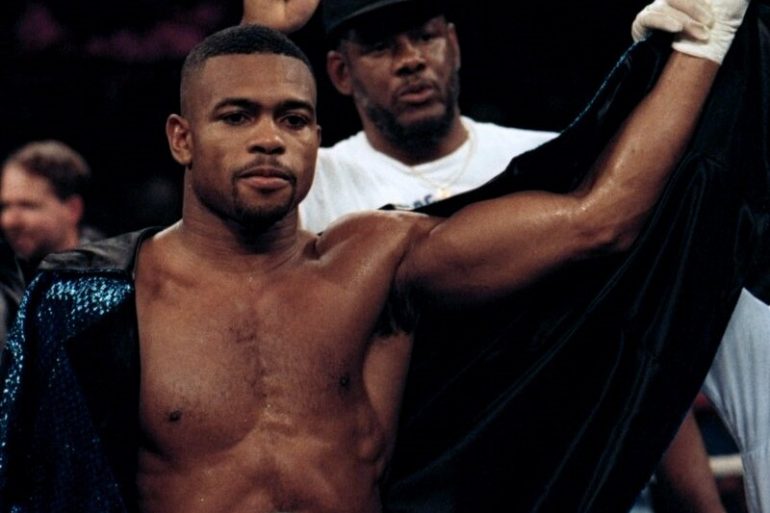 Photo by The Ring/ Getty Images
14
Aug
by Ring TV

Jones, then the IBF middleweight champion, was taking part in the first of three non-title bouts. Unbeaten in 22 fights, with 20 knockouts, the Pensacola star had captured the vacant title by outpointing future great Bernard Hopkins three months earlier.

Malinga wasn’t a star. He wasn’t even close to being a star. The South African technician had a modest record of 35-8 and had suffered losses at every level. However, he’d developed into a cute, defensive stylist and gave British legends Chris Eubank and Nigel Benn plenty to think about in close decision losses.

“I think I got the decision because I was on home soil,” Benn told The Ring years later.

Against Jones, the 37-year-old Malinga came crashing back down to earth – literally.

After losing five rounds on the spin, Malinga’s situation appeared hopeless. His opponent was too quick, too powerful and too good. With just over a minute remaining in the sixth, Jones created a punching angle and led with a big left hook. The punch caught Malinga flush, knocking him out cold, and he was very fortunate that a right uppercut missed the target. Despite his limbs betraying him throughout the count, the visitor miraculously pulled himself erect at 10. Referee Elmo Adolph simply gave him a hug and a pat on the back.

This was Malinga’s first knockout defeat and he wouldn’t be stopped again for seven years.

Jones went on to win myriad world titles at different weights. The determined and ageless Malinga would claim the WBC super middleweight title twice, first at the expense of old rival Benn (SD 12) and then again from another British fighter, Robin Reid (UD 12). He won the second of those titles at the age of 42.