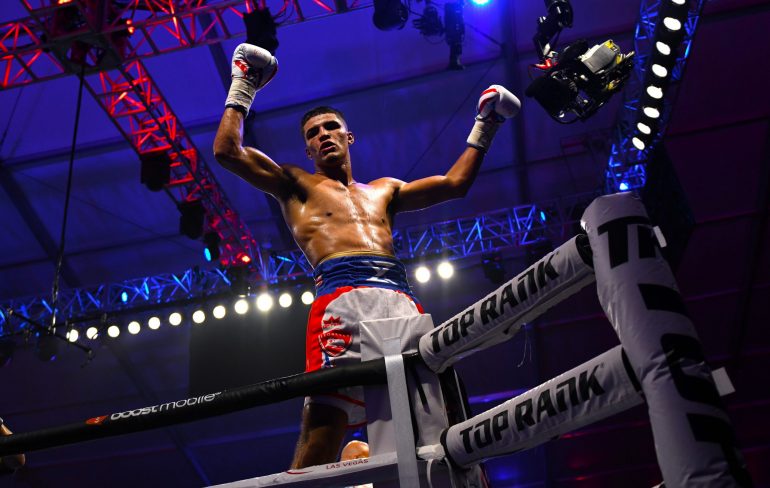 Las Vegas—Xander Zayas didn’t know it, but he had a big head. Bigger than anyone’s head on the Top Rank ESPN show on Saturday night from Resorts World Las Vegas.

Right there, at a turn in the main lobby of Resorts World, sits a flashing advertising bulb in the shape of a huge Christmas ball. Planted in the middle of it throughout much of the week was a portrait of Zayas’ head—a gigantic crew cut with a smile.

The teenaged junior middleweight laughed at the reference. He joked he could never have a head as large as the one on the sign, though it doesn’t mean his growing stature in the boxing game won’t soon blow up to those proportions.

Zayas, 19, has been moved along carefully under the watchful eye of Top Rank, his manager Peter Kahn and trainer Javiel Centeno.

A step in that growth came Saturday night before a soldout crowd of 3,553 as the co-feature marking the return of former lightweight world champion Teofimo Lopez Jr. since his loss to George Kambosos last November.

Zayas splashed Elias Espadas with a counter right hand to the face and forced referee Russell Mora to stop it at :23 of the fifth round, logging the best performance so far in his young career.

Zayas (14-0, 10 knockouts) claimed something called the NABO junior middleweight belt, and it could be the first of many belts coming his way.

“I feel amazing and this is special to me,” said Zayas, who was warned about low lows in the fourth round by Mora. “I’m glad to be back with a strap around me, a regional title, something amazing. It’s special to me.

“I promise (the low blow) wasn’t intentional. I wasn’t trying to hit him low. I guess the punches were just landing there. Referee (Russell Mora), I want to thank him. He gave me a chance. I just listened to the corner, and they told me, ‘Hey, forget about the body.’ Let’s get these head shots and then we’ll start working the body. And that’s what we did in round four on. I think I could have been a little sharper with my defense. My corner was telling me that. I knew it.”

Zayas spilled Espadas (22-5, 15 KOs) on the canvas with around 2:03 left in the first, when he stepped back and slammed a counter left hook off of Espadas’ chin. Zayas worked well up and down, and his jab popped Espadas’ head back as if it was on a spring.

Through the first three rounds, Zayas had put on a virtuoso performance, looking probably the best he has as a pro. He used distance well, snapped his jab accurately, mixed in some combinations, and worked well to the body, despite Mora’s questioning Zayas about how low his punches were. 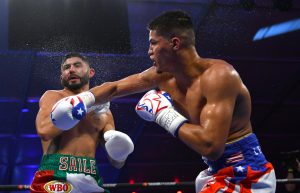 In the fifth, Zayas jumped Espadas with a huge right, sending him to the canvas and Mora wisely waved it over.

Montoya tried pressing Cortes, using his superior height and reach, though each time he stepped within Cortes’ punching range, he was greeted with heavy shots to the head, and a few right uppercuts.

After getting rocked a couple of times, Montoya (20-4-1, 14 KOs) felt compelled to say something to Cortes as they passed each other when the bell ended the fourth.

In the opening minute of the fifth, referee Kenny Bayless warned Cortes to keep his punches up, after landing a borderline right on Montoya’s waistband. Cortes continued to get stronger as the rounds progressed. He started well again in the sixth, clipping Montoya with a right as he attempted to lean away from Cortes.

But the fight took an interesting twist when with just about a minute left in the sixth, Montoya rocked Cortes with a looping right that caught Cortes right on the chin. Cortes was caught by the ropes and Bayless never called it a knockdown, but the last 60 seconds of the sixth was rough for Cortes. 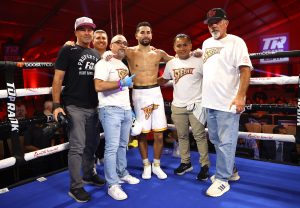 Featherweight Jose Vivas (22-2, 11 KOs) closed out the off-TV portion of the undercard with an eight-round, split-decision victory over Edy Valencia (19-8-6, 7 KOs).