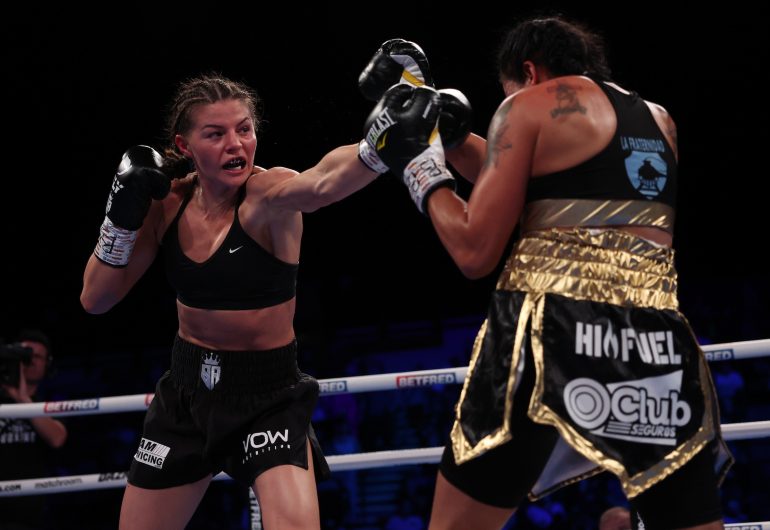 Only a few relevant fights took place last week in the realm of women’s boxing, but only one generated enough quality of action to create changes in our Ratings. And some change it was.

In a solid performance against the previous No. 1, England’s Sandy Ryan somersaulted all the way to No. 2 in the junior welterweight division with a win over Argentina’s Erica Farias in a high-stakes rematch.

The pair had already met back in March, with Farias taking a hard-fought but ample decision win in what was considered a minor upset against the former amateur star, who was somewhat rushed to face a solid former champion like Farias in what was then only her fourth pro bout.

Now, it was do-or-die for Ryan, who was thus forced to face this crossroads bout too early in her career, with Farias upping the ante by turning it into a grudge match for pride and country.

In the end, Ryan got a close decision (two points on two cards, for on the remaining one) and in doing so she gave proof of a talent that, although notable, needs to be polished before undertaking more serious challenges.

With this result, a rearrangement of the entire lineup at 140 was in order, and former No. 2 Kali Reis jumped to No. 1 to be followed by Ryan at No. 2 and Farias now at No. 3. Mary McGee and Oshin Derieuw were dropped to No. 4 and 5 respectively, and Jessica Camara was bumped out, in what was a unanimous vote by the Panel.

“Ryan fought well and showed some flashes of a true professional boxing style,” said boxing historian Malissa Smith. “She used levels effectively, and did manage to fight more at distance using her height to good effect. Farias though, was able to still fight inside, and she also used her defensive skills very effectively, blunting some of Ryan’s flash. Ryan (…) will need to work on, deepening her boxing shot selection, ring generalship and footwork if she hopes to fight someone of the caliber of Chantelle Cameron.”

Columnist Mark Jones agreed by saying that “I considered Ryan the best prospect in women’s boxing last year, and now that she’s been trusted onto the world level, she needs a bit of refining, but she’s going to be a spectacular champion. That said, she’s not ready for Chantelle Cameron; she needs more experience against fighters on the level of Victoria Bustos.”

In a solid fight by a Ring champion that did not affect the ratings, Marlen Esparza defended her belts with a solid win over Eva Guzman.

“I had faith in Guzman, who despite the loss proved to be a worthy rival and a tough opponent,” said Rincon Rojo magazine editor Irene Deserti. “Marlen has moments of vulnerability that she manages to get around with her footwork and controlled jab.”

“Esparza is a complete boxer,” agreed writer Yesica Palmetta. “She is fast in attack and defense.  Guzmán boxed neatly and aggressively, yes, and he had a good performance against Esparza, but she couldn’t figure out the strategy needed to win. But she is a good fighter.”